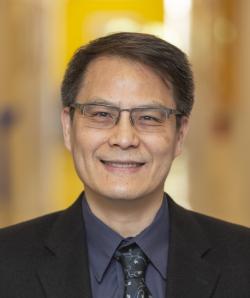 Our lab is interested in the underlying mechanism and identifying anticancer targets of breast cancer.

Breast cancer (BC) is the most common cancer in women, with an estimated 276,500 new cases and 42,000 deaths in the US in 2020.  BCs can be further classified into three subtypes, based on their molecular identifications: Estrogen Receptor alpha (ERα)-positive, Her2 (human epidermal growth factor receptor 2)-positive, and triple (ERα-, PR (progesterone receptor)-, and Her2)-negative breast cancer (TNBC). ERα-positive BC accounts for the largest subtype, with approximately 70% of BC patients.

Our lab studies how transcription and the signaling networks control cell fate in BCs. Ultimately, we hope to harness the knowledge gained from these studies to help fight against BCs. Currently, we are working toward answering the following questions:

The promyelocytic leukemia protein (PML) is a well-established tumor suppressor known to play a role in cell proliferation, apoptosis, DNA damage repairs, and transcription. However, recent studies suggest that PML acts as an oncogene in BC and glioblastoma (GBM). Specifically, we show that a loss of PML by knockdown inhibits the proliferation of the ERα-positive BC cells. Conversely, ectopic expression of PML1, the most abundant PML spliced isoform in BC, augments the growth, migration, and invasion of ERα-positive BC cells. In contrast, the expression of PML4, a well-studied PML isoform with tumor suppression activity, does the opposite. We are the first to demonstrate that the spliced isoform PML1 functions as an oncoprotein. Accordingly, clinical data show that high expression of PML1 mRNA in ERα-positive BC correlates with a poor prognosis.

More than 70% of all BCs are ERα-positive. While initial treatments of current ERα-targeted endocrine therapies are successful, patients with metastasis eventually develop resistance. Among these patients, acquired ERα mutations have been established as a new mechanism of drug resistance for ERα-positive BC patients. ERα is a hormone-activated transcription factor that controls the expression of a network of genes that encode proteins necessary to drive cell cycle progression. Molecular and biochemical studies indicated that these ERα mutants are constitutively active to promote cell/tumor growth.

With Dr. Sichun Yang in the Nutrition department, we have recently identified a novel interface between the DNA- and ligand-binding domains. Mutations at the interface disrupt estrogen (E2)-induced ERα-mediated transcription activity. This observation indicated that the integrity of the interface is critical for ERα transcription activity and raises the possibility that small chemical molecules that bind to the domain interface may regulate ERα activity. With this goal in mind, we screened and identified several FDA-approved drugs, including a drug termed T4, with the ability to bind ERα domain interface and to inhibit E2-induced ERα activity. We are currently characterizing T4 for its ability to inactivate endocrine-resistant mutant ERα activity.