Are you interested in supporting women's activism on campus today?  If so, visit one of these organizations to see how you can become involved.

Gillian Prater-Lee served as the student assistant for the 2017-2018 school year and, during her tenure, completed research focused on the Women's Liberation movement at CWRU from 1965-1972 under the direction of Interim Director Tim Black. The project used primary source material in the form of newspaper articles from The Observer, flyers and pamphlets from the University Archives files, and images from CWRU yearbooks.  Gillian synthesized the material into one cohesive narrative, highlighting certain themes from the documents. Her research was presented publicly at during the Spotlight on Women's Research Series at the Flora Stone Mather Center for Women in April 2018.

The 1960s and 1970s were a time of great political and social turmoil in the United States. During this brief period, the highly contested Vietnam War was being fought overseas requiring a compulsory draft of young men, the Cold War was raging and anti-Communist sentiment was high in mainstream politics and society.  The Civil Rights movement advocated for equal treatment under the law for people of color and women advocated for the equal chance to participate in academic and professional life.  Within this framework of national change, college and university campuses across the country were hotbeds of activist activity.  In Cleveland, Case Institute of Technology, Western Reserve University, and Case Western Reserve University (post merger in 1967) were home to much of this activism.  At these educational institutions, the broader struggle for liberation manifested itself in broad student activism regarding the antiwar movement, civil rights, and women's liberation.  Student activism was substantial as thousands of students came together in controversial campus meetings, general student strikes and protests, and occupations of university buildings.

Overview of the Women's Liberation Movement at CWRU 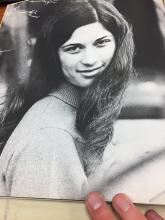 Activism about women's liberation took place regarding   reproductive rights, sexual liberation, women in academia  and STEM fields, intersectional identities, women in      athletics, and the Equal Rights Amendment.  Through activism and education partnered with the broader community, women at Case Institute of Technology, Western Reserve University, and Case Western Reserve University developed a social movement that created substantive change in the university structure, advocated for broader change on the campus, city, and national levels, and educated and liberated women in the campus community.

Education and Women in STEM 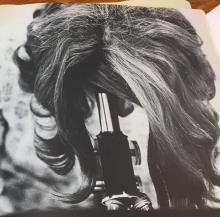 The women's liberation movement was primarily focused on the empowerment and education of women through workshops, conferences, and "conscious raising" discussions.  These forms of education were the primary means by which awareness around women's liberation was created on campus; women were empowered to become activists and advocate for themselves and other women through these educational programs.  The group raised questions about women's access to education and the limits for women's career prospects, particularly in STEM fields.  During this time we see calls for increased representation of women in these field and the liberation of women from traditionally gendered courses of study.  Events were hosted on topics ranging from women in the sciences to women in grad school to the representation of women in professional fields and academia.

Women in the University

The movement called for increased representation of women in the university, both in terms of enrollment and in the creation of a women's studies department. Specifically, in 1973, the Report of the President's Advisory Committee on the Status of Women in the University was published, which completed a comprehensive survey of representation and attitudes of women in the student, staff, and faculty populations.  In this study, the committee issued surveys to faculty and staff in which they sought to determine perceptions of women at CWRU.  Some especially notable figures include that only 18% of faculty and 9.5% of full professors in 1972 were women.  By in large female faculty were concentrated on fields commonly coded as feminine such as nursing and social work. 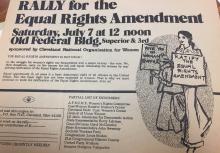 Women at CWRU advocated for equal rights for women outside the university as well. Specifically, the women's liberation group campaigned around the Equal Rights Amendment of 1972, a piece of legislation that would ensure women could not be discriminated against because of their sex.  The legislation was passed by Congress but never ratified by enough states to become part of the Constitution.  Women rallied around the amendment downtown, and and the women's liberation student group at CWRU professed to being actively engaged in legislative reform.

campus to congregate.  It appears that the women's center was eventually created by a student lead initiative and housed in Thwing.  The women's liberation group held their weekly conscious raising discussions here.  The creation of the women's center was a primary objective of women's liberation activists at CWRU who felt that there needed to be a space on campus in which all women could relax, study, and discuss pertinent social issues.  The center consisted of an office and lounge where women were encouraged to linger, listen to music, and participate in feminist discussions. 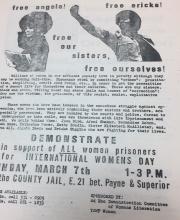 The plight of incarcerated women was highlighted in one demonstration in which CWRU women rallied for the release of Angela Davis and Erika Ruggins.  In the flyer announcing this demonstration, the Ad Hoc Demonstration Committee of Women's Liberation discuss the systemic injustices that force women to commit crimes as a way to survive, and the exploitative system system of "correction" that is meant to quell such behavior.  The committee condemns the criminal justice system, and connects the jailing of prominent black women to the greater systems that cause the unjust incarceration of millions of other women outside the public eye. 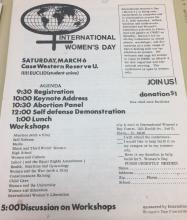 The women's center and International Women's Day Committee hosted several conferences and social events for international women's day during this time period.  It seems like these events highlighted the oppression of women worldwide, not just the oppression of middle class white college women in the United States.  Though the women's liberation movement at CWRU professed to advocate for oppressed women around the world in these particular events, it appears that most of their activism was focused on domestic issues, such as the reproductive rights of women in the United States and the Equal Rights Amendment.

A huge movement both influenced by women's liberation ideals but wider reaching and involving a greater base of individuals on campus was an initiative to make housing coed.  At the beginning of this period, women at Case Institute of Technology were housed in Mather College dormitories (the women's college at Western Reserve University).  In 1969 women were allowed to be housed in coed housing on Murray Hill Road as well.  In April 1970, a whole campus meeting was convened to discuss the possibility of expanding coed housing was gradually expanded across the campus as CIT and WRU merged and women became enrolled to a greater degree in programs outside Mather College.  There was huge student support for coed housing as students answered questions of why to allow more coed housing with "Why not?"  Most of the tension around the issue appeared to have been between the administration and students.  Students advocated for increased housing choice and the administration pushed back with concerns about the enforcement of restrictions to the hours in which people could visit the dorm rooms of people of other genders.

This housing movement can be seen as part of a wider paradigm shift around sex at CWRU.  The sexual liberation movement emphasized an individual's right to pleasure and to control one's own body.  The upsurge of counterculture on campus lead to a perception that the liberation of women was equivalent with sexual liberation.  This conception aside, ideas of sexual liberation became the norm on campus.  This is especially evident in the images for the CWRU 1970-1971 yearbook.

Abortion activism on campus became a main focus of the women's liberation movement in the 1971-1972 academic year.  Women at CWRU hosted an Abortion Rights Conference in Thwing, held an Abortion Action Week in May 1972, and attended a protest in Public Square advocating for abortion rights.  The main organization organizing around this issue on campus was the Abortion Rights Project of Cleveland, which appears to have had both student and non-student membership and met at CWRU.  The organization supported the Abortion Rights Act of 1972, and picketed at the Park-Chester Building every Saturday to defend the Supreme Court's ruling on Roe v. Wade.  Women at CWRU even hosted a "Tribunal on Abortion, Contraception, and Forced Sterilization" in which activists used a variety of media to emphasize their arguments with regards to reproductive rights.  Women advocated for more than simply the right to abortion; the movement advocated for free abortion for all women.  Reproductive rights as advocated for by the movement were not at the time fully recognized on campus.  A woman at CWRU could not get contraceptive information or services through the University Health Services and resources were not provided to students about abortion counseling.

Women in the Anti-war Movement 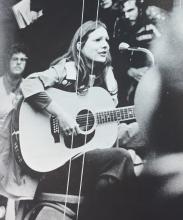 Women were repeatedly encouraged to be involved in the anti-Vietnam movement by figures prominent in women's liberation activism and the anti-war movement both on campus and off.  Multiple activists made the claim that the oppression of women in the United States is similar to that of the Vietnamese people, and that one cannot be for the liberation of women without being for the liberation of all people.  Furthermore, many women involved in women's liberation organizing on campus were highly involved in anti-war organizing as well.  These women organized a contingent of women to travel to a  anti-war protest in DC, citing statistics that billions of dollars that were being used on the war could instead be funneled into childcare, education, and medicine. 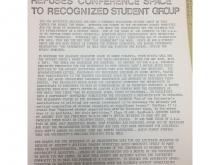 Finally, many of the women involved in the women's liberation movement also identified as gay and advocated for gay liberation.  For example, Roberta Scherr, a prominent organizer in both the women's liberation and anti-war movements identified as gay.  The main student group on campus that advocated for gay liberation in the 1970s was the Gay Activists Alliance.  Though activism around LGBT liberation was mainly after 1972,  I chose to touch on this movement in my research because the intersectional identity of LGBTQ women is crucial to understanding the identity of a women at CWRU.   Controversy arose about discrimination against gay individuals on campus arose when the administration refused to host the Ohio Gay Pride Conference, citing false claims of insufficient funds and space.  It seems that the LGBTQ liberation movement on campus was largely organized by gay men, and addressed mainly the issues associated with people of that identity.  For example, in the late 1970s only about one fifth of the Gay Student Union was female.  Therefore, although many queer women were involved in student activism on campus from 1965-1972, women were not as involved in LGBTQ student groups as people of other gender identities.