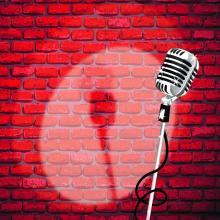 MINI-COURSE (IN-PERSON ONLY)
JEWISH HUMOR: FROM THE BIBLE TO SATURDAY NIGHT LIVE
Monday, May 23 – Wednesday, May 25 | 10–11:30 a.m. ET
Where does Jewish humor originate? What role did humor play in Jews’ negotiations with the onset of modernity? And how has comedy influenced the way Jews have been perceived in contemporary America? This course begins with Sarah’s laughter, drawing on a variety of biblical and rabbinic sources to explore whether these early forms of humor are connected to Modern Jewish comedy. We then move to the role of satire and parody in Jews’ negotiations with the onset of modernity, with particular attention to literary works by beloved Yiddish writers such as Mendele Mokher Seforim and Sholem Aleichem. Finally, we watch Jewish clips from the famous show Saturday Night Live to explore how Jews are viewed in America today.
Member Cost: $36 | Nonmember cost: $45

MINI-COURSE (IN-PERSON ONLY)
OBSCENITY, CENSORSHIP, AND AMERICAN CULTURE
Tuesday, May 24 – Thursday, May 26 | 1:30– 3 p.m. ET
Freedom of speech is a distinctive aspect of American culture, but the First Amendment has not always protected Americans’ self-expression related to sexuality. Drawing on Joshua Lambert’s award-winning book Unclean Lips, this course explores the history of obscenity in American law, literature, and culture from Anthony Comstock to FCC v. Fox. What kinds of sexual expressions have been censored and who has fought for increased freedom? And what’s ultimately at stake in censoring or permitting people to write about and represent sex?
Member Cost: $36 | Nonmember cost: $45

CLOSING LECTURE  (SELECT IN-PERSON AND REMOTE OPTION)
WHAT WAS THE JEWISH LITERARY MAFIA -- AND DID IT EXIST?
Thursday, May 26 | 7–8:30 p.m. ET
In the 1960s and 1970s, many American authors, Jewish and non-Jewish alike, complained about a "Jewish literary mafia" that was controlling American publishing. This talk will examine where these complaints arose, with attention to celebrated publishing houses (Knopf, Random House, Simon & Schuster, and Farrar, Straus and Giroux), prizes (the National Book Award), magazines (Commentary and the New York Review of Books), and authors (Saul Bellow and Cynthia Ozick). What can conspiracies, conflicts-of-interest, and nepotism teach us about the history of American literature?
IN- PERSON: Member Cost: $5 | Nonmember cost: $10
REMOTE: Cost: $5

This week of learning is generously supported by an anonymous donor.