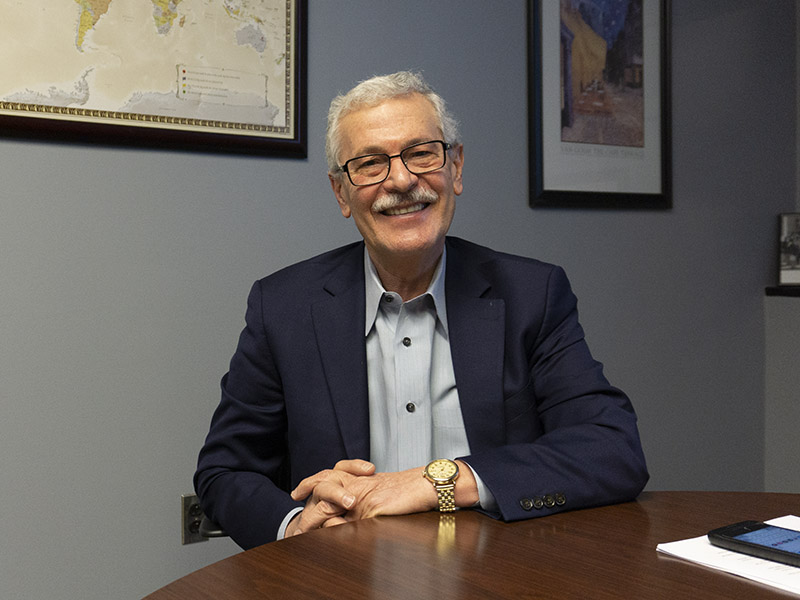 How Healthy Eating can help people with Autism

We all know that "eating right" is a good thing. Dr. Mhmoud Ghannoum has taken this adage a step further. His recent research shows promise for helping people with autism can improve stress levels and well being, by correcting and balancing the microbiome in the gut. His recent research data shows that kids with autism have a microbiome imbalance that is not present in those who do not have autism.

Dr. Gahannoum begun his research in medically important fungi while working on his PhD. He discovered early on that most microbiome research only looked at bacteria. His early work showed clearly that the microbiome is not only made of bacteria but also fungi as well as viruses.

In 2010, he wrote an article emphasizing that it was important to look at both bacteria and fungus because they work together. If you kill one of them the other takes advantage and overgrows. There needs to be a balance.

Gahannoum is enthusiastic about his research. He coined the term “microbiome” because mycology is the study of fungus. He investigated oral fungus (there are 101 different fungal species in the mouth apparently) and the relationship with the bacteria also co-habiting there. While studying HIV patients, who tend to develop aggressive oral thrush he looked more closely at the imbalance or “dysbiosis” between fungi and bacteria, and from there begun to study the human gut and look for dysbiosis there.

Good Fungi and Bad Fungi
“There is good fungus,” said Dr Ghannoum, “for example, when we and others were looking at Crohn’s disease patients, we found that in healthy people, there is more Saccharomyces cerevisiae. Saccharomyces is the baker’s yeast, and this is a good fungus. Whereas the bad fungus is Candida. This can cause various digestive as well as systemic infections.”

Studies consistently show that 50-60% of people have Candida in their gut. But as long as it is in low numbers, it’s helpful. Bacteria in the gut keeps Candida under control. However, when antibiotics are administered, they kill all the bacteria and it starts to overgrow and cause issues. It’s a balance between the two that’s important.

“Even Candida,” says Ghannoum, “which has a bad rap, when it is in low numbers, helps break down the complex carbohydrates – complex sugars. And that helps the beneficial bacteria to grow. And when they grow, they start to metabolize small molecules, which help us in respect to our communication between the gut and the brain. It’s really amazing.”

Brain-Gut Communication
Discovering communication between the gut and the brain led Dr. Ghannoum to look at autism patients. Studies show that kids who have autism, compared to those that don’t, have an imbalance in their microbiome. His hypothesis is that if we can re-balance and maintain a stable microbiome in kids with autism then we are going to be able to help them.

“You know we used to think only the brain tells us to do everything,” says Ghannoum, “now we know it is bidirectional, they do everything together. If you have a good balance, in your gut, messages go to the brain which helps it, and improves for example, your stress level and overall wellbeing.”

Dybiosis and Autism
Dr. Ghannoum is completing a study to see how the dysbiosis can be effectively corrected in autism children. The subjects fall into three main categories, those with severe autism, mild-to-moderate, and those who exhibit autism characteristics but function well.

“I was traveling recently, and I had a lot of time to think about it. I said “Oh my God,” with 1,000 patients in the study, this is really a complex area. And then I thought that what we should do moving forward is look at those in the mild-to-moderate group. If we can deal with them If we can then we can deal with the more severe cases.”

This decision was based partly on being about to get clear feedback from the kids, but also because Ghannoum is under no allusion that working with children is easy.

“It’s not just a matter of eat this and then you’ll be fine” observes Ghannoum, “these kids have certain likes and sometimes they don’t like it. You have to find a way to make the right food appealing to them. To me it would be great idea to go with the food as well as a probiotic, or with the food as well as a therapeutic approach.  But we need to design these so that they are acceptable to these kids. Otherwise it’s difficult.”

I feel very fortunate that Dr. Singer at PAER contacted me. I was also talking to Akron Children’s Hospital. They invited me to give a talk, and I met with a lot of people from different disciplines, clinicians. The people who take care of autistic kids were very keen on this."

“It’s critical that we have a team, which is where PAER is really going to help. We need a nutritionist, we need people who are psychologists, and we need people who know how to deal with these kids, so that we make it successful."