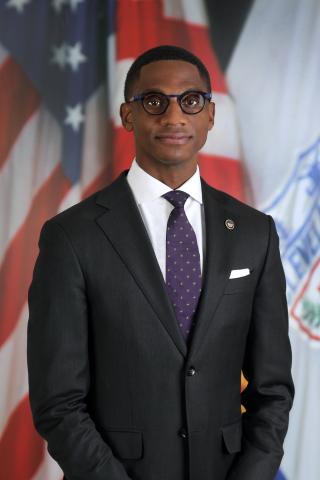 Justin M. Bibb is the 58th Mayor of Cleveland working to improve public safety, invest in neighborhoods and modernize City Hall. On January 3, 2022, Mayor Bibb took the oath of office as the city’s first millennial mayor.

Mayor Bibb was born and raised on Cleveland’s southeast side in the Mt. Pleasant neighborhood. Over the past 15 years, Mayor Bibb has worked in government, business and the nonprofit sector as an executive and nonprofit leader. He started his career in public service working for President Obama when he was in the U.S. Senate and later at Cuyahoga County as a Special Assistant advising on education and economic development policies. He led the Global Cities Practice at global research firm Gallup, served as Vice President at KeyBank and most recently as Chief Strategy Officer at Urbanova, a startup focused on improving cities.

Mayor Bibb is a proud American University alumni with an undergraduate degree in Urban Studies. He completed the General Course Programme with an emphasis in Social Policy and Economics from the London School of Economics and is a graduate of Case Western Reserve University. He holds a Master of Business Administration (MBA) and Doctor of Law (JD).

Mayor Bibb’s vision for Cleveland is to become a national model for city management, police reform, and neighborhood revitalization.

Mayor Bibb joins a long list of distinguished speakers including: