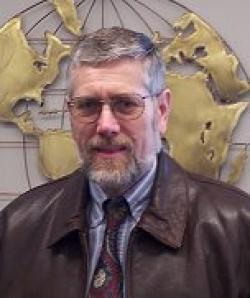 Dr. Joseph Koonce, Department of Biology Emeritus faculty, has been upgrading the existing weather stations as part of a planned effort to install a high-resolution environmental monitoring network at the farm. The goal is to improve understanding of the interaction of environment and populations of animal and plant species at the scale of the individual organism for research and teaching.

The existing weather stations are located in an open field near the permanent plot and in the primary forest in the north woodlot. These two locations represent the extremes in level of direct solar radiation to flat topography at the farm. These weather stations now have remote data loggers that report conditions via GSM phone to a web server. Every 12 hours, data is uploaded and archived for interactive use by researchers or students. Probes monitoring incident solar radiation, temperature, relative humidity, precipitation, wind speed and direction, and soil moisture are in the open field.

In the forest site, probes currently monitor temperature, relative humidity, soil moisture, and wind speed. In addition to the remote data loggers, a stand-alone data logger for temperature and relative humidity in other forests and open-field areas was deployed. The next step will be to deploy water level stand-alone data loggers in Squire Pond, the vernal pool constructed for amphibian habitat in the north woodlot and the small creek draining the sub-watershed containing the weather stations.

In the next expansion phase of the monitoring network, a remote sensor network will replace the GSM remote data loggers and stand-alone data loggers. This network will consist of a radio base station receiver in the Biology Field Station and a set of radio repeater antennas arrayed over the entire farm. Any number of radio equipped (IEEE 802.15.4, 2.4 GHz ISM band) sensors can be added. The network also will be able to track movement of radio-tagged animals.