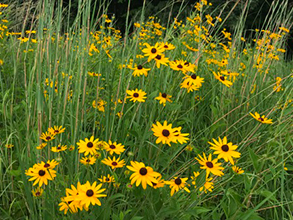 The prairie restoration project began in the spring of 2006 in collaboration with the Cleveland Museum of Natural History and the Ohio Prairie Nursery. The program aims to restore four acres of old pasture area into a native prairie containing several Ohio indigenous grasses and 20 forbs species. The first survey taken in May of 2007 showed a consistent presence of several early prairie forbs.

In April, 2009, 2010, 2013 and 2016 the Geauga Park District staff assisted the farm with prescribed burn of the site. Permits for open burn are obtained from the Ohio EPA office. Certified prescribed fire managers through ODNR, Division of Forestry, supervised the burnings when weather conditions were right. Farm staff assisted the burnings by rototilling the area surrounding the prairie to create a firebreak.

During the spring and summer, 17 wildflowers and grasses were observed in the prairie restoration area. One of the most noticeable vegetation changes was observed in September, when a high density of Big Bluestem grasses dominated the prairie area.

The prairie restoration project is designed to enhance the farm's rich wildlife and serve as a teaching and research tool to complement the farm's expanding academic programs. This project implementation was supported with funds provided by Brian and Cindy Murphy.

For more information on prairie plant species, download our presentation