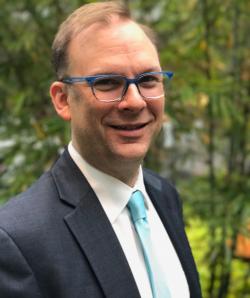 Matthew L. Garrett, Professor of Music Education, Director of the University Center for Innovation in Teaching and Education (UCITE), and Coordinator of Undergraduate Studies in Music Education, joined the faculty at Case Western Reserve University in 2009. In the Department of Music, he teaches undergraduate and graduate level courses in music education and coordinates the music education licensure program. Garrett has directed UCITE since 2017, drawing on his expansive background in educational pedagogy and over 25 years of classroom teaching experience to help faculty, staff, and students explore the art and science of teaching.

Garrett has served on the CWRU lesbian/gay/bisexual/transgender/queer-questioning/ally (LGBTQA) Committee and he was a founding member of an interdisciplinary LGBTQ Research Group. He has spoken on the CWRU Power of Diversity Lecture Series and, most recently, on the Social Justice Institute Research Lunch Series. In 2016, he was honored with a CWRU Prism award, for outstanding contributions to the campus LGBTQ community. Garrett is currently chair of the planning committee for the National Symposium for LGBTQ Studies and Music Education.

Garrett has been interviewed regarding his research on developing critical thinking skills for articles in the national music education journal Teaching Music. His strategies for incorporating critical thinking skills in choral rehearsal environments were published as part of a hybrid print/online music text series from Hal Leonard and McGraw Hill Education, Voices in Concert.

Before joining the Case Western Reserve faculty, Garrett was a music educator in Central Florida and Southeast Massachusetts public schools at the middle and high school levels. While in Boston, he was the conductor of the Handel and Haydn Society Children’s Choruses.

Garrett currently serves as Music Director at The Church of the Covenant, in University Circle. He continues to work with students and teachers in school music and music teacher preparation programs across the country.