Take your first step toward a career in music with a degree from one of our undergraduate programs.

Advance your expertise in your field with a degree from one of our graduate programs.

During the summer of 2020, the Kulas Music Collection relocated to the first floor of the Kelvin Smith Library.

The Department of Music maintains an impressive collection of modern reproductions of early instruments. The Historical Performance Practice program offers a wide range of ensembles from Medieval to romantic, and the Kulas Collection of historical instruments (renaissance, medieval and baroque string, wind, and brass instruments) is available to all students. The program also owns a wide range of historical keyboard instruments (French, Italian, and German Harpsichords, a continuo organ, and two fortepianos).

The Center for Popular Music Studies (CPMS) exists to promote scholarship and teaching about the history and significance of popular music, which includes collaborations and partnerships with institutions in Cleveland and around the world. The goals and objectives of the CPMS include: supporting collaboration between researchers and historians of popular music, investigating and creating new approaches to teaching popular music (including performance), providing opportunities for graduate students to learn about popular music in an active, critically robust program, and advancing emerging research in popular music through sponsorship of visiting scholars.

View the Maltz Performing Arts Center on a map. 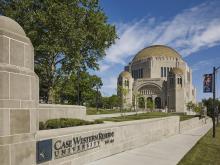 The Milton and Tamar Maltz Performing Arts Center at The Temple–Tifereth Israel opened in 2015 after extensive restoration and renovation of the structure, which first served as a synagogue in 1924. Today, the center is an active venue for performances and events, including lectures and music concerts, including the Silver Hall Concert Series (during which our department ensembles perform). Phase One includes Silver Hall, a 1,000-seat concert hall for large ensemble performances, and Koch Hall, a 90-seat recital hall for smaller performances. Phase Two, which includes a proscenium theater, a blackbox studio theater, rehearsal studios, practice rooms, and costume and scene shops, is under construction.

Get directions to the Cleveland Institute of Music.

Since 1968, Case Western Reserve University and The Cleveland Institute of Music have participated in an integrated music program at the undergraduate and graduate levels. The Joint Music Program allows students at both institutions to take advantage of the resources of a major research university in the context of a liberal arts education as well as those of a leading conservatory. Read more about this partnership.