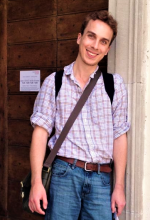 Dane Harrison is a second-year Ph.D. student in Historical Musicology whose research interests range from fin-de-siècle art song to classic American popular song—especially those composed during the halcyon period from the 1920s to the 1940s. He undertook his prior musical education at Pasadena City College, the College of William & Mary, and the University of Richmond, from which he received his bachelor’s in 2014. As a pianist, he has participated in both the Vancouver International Song Institute and The Castleman Quartet Program. In his spare time, he enjoys cooking, non-academic writing, playing the piano (as well as, on occasion, the cello), and watching golden age Hollywood films.