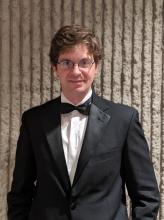 Marcelo Rebuffi is a Ph.D. student in Historical Musicology at Case Western Reserve University. His research explores relations between mythology and tonal music.

As violinist and violist, Marcelo performed in a single season (2011) the entire violin solo repertoire of N. Paganini, in addition to J. S. Bach’s Six Suites for Violoncello transcribed for viola, in several concert halls of Argentina and Mexico. He has also performed as soloist with orchestra the Violin Concertos by Beethoven, Brahms, Bruch, R. Schumann, Mozart, J. S. Bach, and Vivaldi, among others. A founding member of the ensemble Quatrotango, described by the New York Times as “excellent,” Marcelo has been on the stage of several major concert halls on the five continents, including the Sydney Opera House, Joyce Theater NYC, BBC of London, and the Petronas Tower Philharmonic Hall in Malaysia, working for IMG Artists, among other agencies. In 2005, Marcelo earned Argentina’s top music award, the “Carlos Gardel Award,” for the CD  “La Vida y La Tempestad,” recorded live in Japan in 2004. As regards his activity as composer and arranger, his “Variations on the Four Seasons of Buenos Aires by Piazzolla” have been recorded and edited on the CD “Quatrotango plays Piazzolla,” and have received praise from critics as well as another nomination to the Carlos Gardel Award. Marcelo was commissioned to compose a piece, “The Invention of Meister Eckhart,” whose international premiere took place at the Music Festival of Mexico City (FEMEX) in 2013. The CD “The Invention of Meister Eckhart” has been released in 2015.