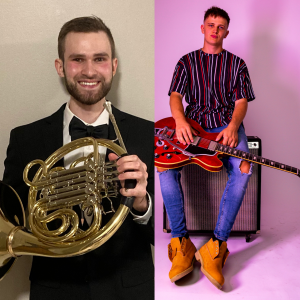 Join Music Capstone students Will Friedland and Xavier Lynn as they share the products of their research. Both Friedland's project, "Finding Meaning in Sol Berkowitz's A New Approach to Sight Singing," and Lynn's entitled "Music as a Platform for Anti-Racism" include performative musical elements complemented by research-oriented supporting documents that consider perspectives on the production of meaning in musical experience and racialized musical postionalities, respectively.

Presented on Zoom at the provided link below.

ABSTRACT: Sol Berkowitz' A New Approach to Sight Singing ([1956] 2017) has been a tool of higher education for decades. During its tenure as de-facto guidebook to the styles of Common Practice vocal writing, the work has been used as a textbook for sight singing in a context that reflects proper musical structure. Despite its author’s strict adherence to the rules of Western music theory, the book does not have a reputation for containing beautiful, pleasurable, or meaningful works. To understand the role of the Berkowitz text in the musical landscape between academic, musical examples and so-called meaningful music, I analyze theories of aesthetic criticism. The goal of my paper is to examine the factors in musical meaning-making. In it, I compare the ideas of critics, composers, and music researchers in order to portray a coherent definition of meaning in music. The essay considers an intellectual history of theories of musical meaning and demonstrates, as previous framings have suggested, that a musical work’s potential aesthetic efficacy lies not only in its harmonic syntax and tonal structures, but also in the reception and interpretive work of the listening subject.

Xavier Lynn (right)
"MUSIC AS A PLATFORM FOR ANTI-RACISM"

ABSTRACT: This project consists of a paper accompanied by a selection of music I have arranged and/or composed. As a white musician frequently engaged in black musical spaces, the musical segment is a direct representation of my life-long navigation of race, and my own appropriation of black music. The inquiry of the paper is animated by this investment and comprises a consideration of how white musicians might more ethically engage in such appropriation and the responsibilities that accompany cultural exchange. Through a mixed methodological analysis, I conclude that responsible and equitable cultural exchange is possible between racialized groups. However, it is the ethical duty of those occupying elevated positions in various fields of power to make efforts to shed light on the racial inequalities faced by those from whose culture they are borrowing. I find that as a white musician invested in black music, black culture, and black communities, I am compelled to recognize my potential complicity in normalized negative appropriation, locate it, and root it out.