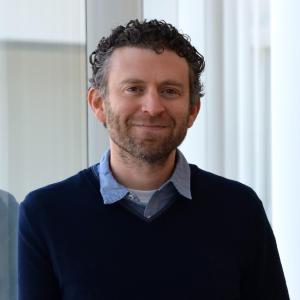 Congratulations to Daniel Goldmark, Professor and Director of the Center for Popular Music Studies, on being named a winner of this year’s John S. Diekhoff Award for Graduate Mentoring. "This is a major honor and credit to the work Daniel does with our graduate students in the Department of Music," David Rothenberg, Department Chair.

Read more about his award in The Daily.

In a remarkable showing for the College of Arts and Sciences, Goldmark is one of five faculty members from four different departments honored with the university’s most prestigious teaching and mentorship awards.

Goldmark is one of the newest faculty Associate Deans who will serve as members of the dean’s leadership and administrative team. As Associate Dean for Interdisciplinary Initiatives and International Affairs, Daniel will advance interdisciplinary activities both within the College of Arts and Sciences and across the campus, and around the globe. He will also engage our local metro partners in collaborations that enhance innovation and that have real-world impact.

Interim Director of the Baker-Nord Center

As a part of his Associate Dean role, Goldmark will also serve as Interim Director for the Baker-Nord Center for the Humanities. The search for a permanent director will begin this fall.

Daniel Goldmark joined CWRU in 2005. He is a professor of music and has been director of the Center for Popular Music Studies since 2014. His superb teaching and mentoring were recognized in 2010 and 2021, when he received the John S. Diekhoff Award for Excellence in Graduate Teaching and for Excellence in Graduate Mentoring, respectively. He is the author and/or editor of numerous books on animation, film and music, including Tunes for Toons: Music and the Hollywood Cartoon. Since 2007, he has been the series editor for the Oxford Music/Media Series,  and he will be serving as President of the Society for American Music from 2021-23.