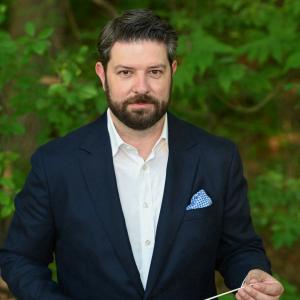 Dr. Christopher Clark will be joining our faculty this fall as Director of Choirs and Full-Time Lecturer in Music Education. He will direct the Case Concert Choir and Case Men’s Glee Club, teach vocal skills and pedagogy, and mentor students in choral music education.

Before coming to Case Western Reserve University, Dr. Clark was the Director of Vocal Music for the Southern Berkshire Regional School District in Sheffield, Massachusetts, teaching choir to students in grades 3-12 with 9 distinct choral ensembles. SBRSD has been designated a “Best Community for Music Education” by the NAMM foundation for the past 6 years. During his time in the Berkshires, Dr. Clark was also the Music Director at Grace Church in Great Barrington, Massachusetts, conducted the Albany Gay Men’s Chorus, conducted the Sheffield Messiah Choir, associate conducted the Cantilena Chamber Choir, and was the treasurer of MassACDA.

Clark’s research interests include the use of improvisation in the choral classroom, and how the religiosity of a teacher overtly or discreetly influences student instruction. His article on James MacMillan’s Cantos Sagrados was recently published in the American Choral Directors Association publication The Choral Journal. He is a frequent honor choir conductor and presenter at music education conferences such as the International Society for Music Education, the National Association for Music Education National Conference, The World Choral Expo in Lisbon, Portugal, the ACDA Eastern Division Conference, as well as the Music Education Associations of Massachusetts, New Hampshire, Ohio, and Maryland. Dr. Clark was designated a 2013 Yale “Distinguished Music Educator,” a 2019 Berkshire County “40 under 40,” and is a quarterfinalist for the 2022 Grammy Music Education Award.