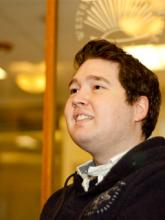 "I am truly honored to be the first recipient of this scholarship," Jennewein says. "This is just another milestone for our LGBT community and our allies to be celebrated and accepted at Case Western Reserve University."

In addition to his involvement with student organizations and initiatives, Jennewein has been involved in the area community as a founding member of the North Eastern Ohio Alliance, a coalition of local universities interested in advancing LGBT affairs.

The scholarship, says Jennewein, who is graduating this semester, is a gratifying end to his years as a Case Western Reserve student. After graduation, Jennewein plans to attend the University of Advancing Technology in Tempe, Ariz., and work toward his master's in game production and management. Jennewein has already made some strides in the game industry, having created his first iPhone game with a team from the university and the Cleveland Institute of Art, called ChromaWaves.

The Nock scholarship was awarded by the scholarship committee of the Lesbian, Gay, Bisexual, Transgender and Allies Committee, which was chaired by Vice Provost for Undergraduate Education Donald Feke.

"The selection committee was completely impressed by the range and significance of Chris's work to advance the LGBT community at CWRU," Feke says. "His successful advocacy on so many LGBT issues clearly made him the perfect choice for the inaugural Nock scholarship."