The Founding of the Institute of Pathology

In the original early 20th century plans to create a Medical Center in Cleveland with University Hospitals partnering Western Reserve University (WRU), the Department of Pathology was to have had its teaching quarters in the WRU School of Medicine and its laboratories in the various hospitals comprising University Hospitals. The Department was actually in operation in the School of Medicine facility in 1925 and directed by Dr. Howard T. Karsner. However, before the programs for the hospital buildings had become too far advanced to permit alteration, it became apparent that the situation was ideal for the development of an Institute of Pathology. Although such institutes had been successful abroad, only a few universities in the United States had adopted them.

The Planning Committee of University Hospitals and the officers of Western Reserve University agreed the most suitable site for an Institute of Pathology would be one contiguous to the hospitals of the Medical Center and as near as possible to the School of Medicine. The committee decided to construct the building on the south flank of the plaza in front of the new Lakeside Hospital as an architectural companion to the Hanna House for private patients situated on the north flank of the plaza. The Institute would also be close to the Babies and Children's Hospital.

In the autumn of 1926, the General Education Board appropriated the sum of $750,000 for the construction of an Institute of Pathology at Western Reserve University. After much study of the situation, the Board decided that the building would house all work in pathology (i.e. Anatomic Pathology) at WRU and University Hospitals, including the Schools of Medicine and Dentistry, Babies and Children's Hospital, Lakeside Hospital, Maternity Hospital, and the Hanna Pavilion. The Institute also served as a central laboratory for biochemistry, immunology, and bacteriology tests. After careful planning spearheaded by Dr. Karsner, a plan was drawn by architect Abram Garfield of Cleveland. The Crowell and Little Construction Company of Cleveland broke ground in February 1928, and on October 7, 1929, a dedication ceremony for the Institute of Pathology took place (a picture of the attending luminaries is displayed in the department to this day). Full activities housed therein commenced at the time of occupation of the new Lakeside Hospital in February of 1931.

After careful deliberation, the Institute became the central laboratory for the University Hospitals and the location of standard laboratory work for several other hospitals. Thus, the work was centralized, creating synergies and efficiencies.  The hospital also intended that the training of young men and women for careers in laboratory work, either in university or general hospital fields, would be significantly enhanced by the breadth of laboratory diagnostic work that was thus established. Furthermore, Dr. Karsner’s vision developed vibrant research programs that were also located in the Institute of Pathology, bringing research and clinical programs together for fruitful intellectual mingling. This revolutionary advance in developing Pathology as a unified diagnostic and research field within Karsner’s Institute model was described in a publication by Karsner in 1932 (“Institute of Pathology of Western Reserve University and University Hospitals of Cleveland” in Methods and Problems in Medical Education, 20th series, Rockefeller Foundation, New York).  This 31-page manuscript provides detailed descriptions of the Institute of Pathology building (including floor plans and architectural details), including its clinical laboratories, teaching facilities and research facilities, as well as interesting information about clinical and academic programs, curriculum, equipment, operations of the Institute and finances (the Institute had an annual budget of $100,000, approximately one third for professional salaries, one third for wages and one third for supplies, equipment and building maintenance). Karsner noted: “The staff of the Institute combines two groups, one whose primary duties are concerned with the University and one whose primary duties are concerned with the hospitals. However, every effort is made to have all staff members regard the Institute as a unit and so direct their activities so as to contribute to the common good.  Thus, the functions of each group overlap and take in both University and hospital work.” 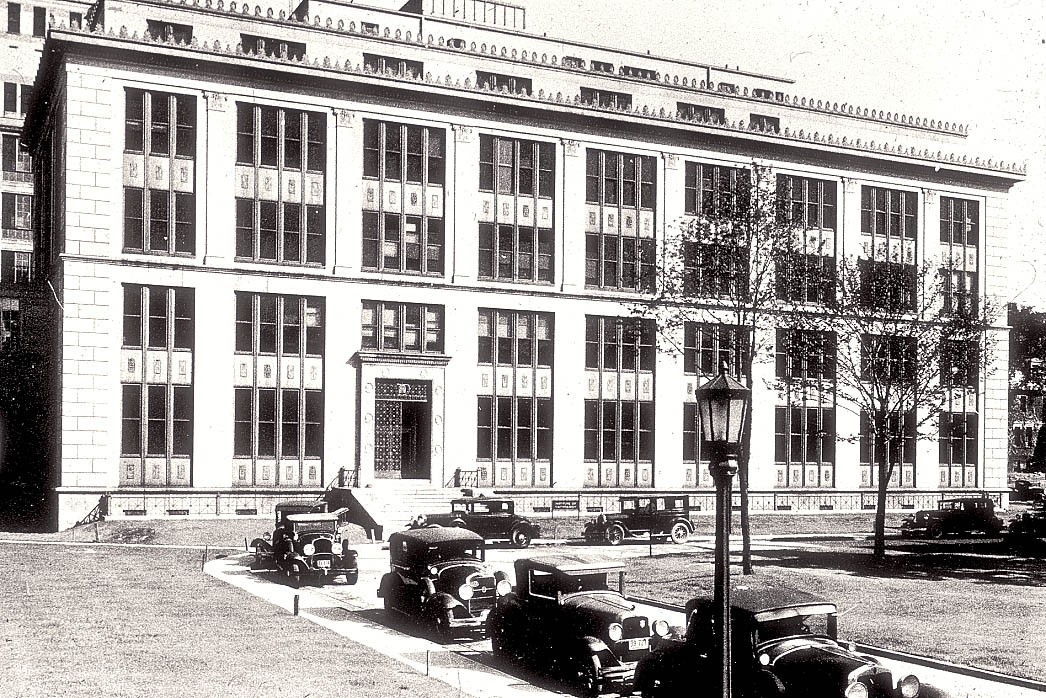 Architectural Details of the Institute of Pathology

The building is of buff brick and Indiana limestone and consists of a sub-basement, basement, five floors, and a penthouse with the elevator machinery, fans, and duct outlets. It is a rectangular building, 160 x 60 feet, with steel framework supported on 40 steel columns and includes more than 100 rooms and 369 windows. There are two stairways and one super-collective drive elevator. The entire floor space of the building is 61,815 square feet and the volume 784,000 cubic feet.

Eight bas-reliefs surround the doorway. Those to the right, as one faces it, represent Morgagni, Virchow, Rokitansky and Pasteur. To the left of the door are Hunter, Bichat, Cohnheim and Welch. Six of the eight are representative of their various countries, whereas Cohnheim represents experimental pathology and Pasteur represents bacteriology and immunology. The bronze doors utilize the zodiacal signs of Libra and Cancer, the pinecone, the medieval urine glass, and medieval lancets. The frieze above the door alternates the pinecone and the cock. The upper grille utilizes the same material as the doors. The central figure is the American caduceus under which is an open book with the legend from Claude Bernard, "Observation shows and experiment teaches."

The frieze around the entrance hall shows the snakes of the caduceus uncoiled and entwined into pine trees with large cones. The chandeliers use the same material as the bronze doors, and serpents support each of the individual lamps. The grilles utilize the Egyptian key of knowledge and the pomegranate.

The symbolic decorations were made possible with the aid of Lieut. Col. Fielding H. Garrison of the U.S. Army Medical Corps, Mr. A H. Slade of the Library of Congress and the architects. The Metropolitan Museum of Art of New York and the College of Physicians of Philadelphia also rendered Service. Major George R. Callender of the Army Medical Museum provided most of the photographs, from which Mr. Halls of the W.B. McAllister Company made the bas-reliefs. That of Dr. Welch was made from photographs obtained from Johns Hopkins University and by personal study of Mr. Halls.