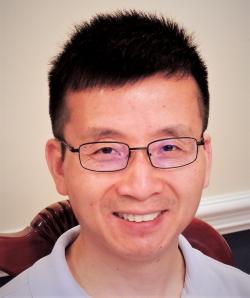 Dr. Kong graduated with BS and MS degrees in Biochemistry at Nanjing University in 1987 and 1990, respectively, and he obtained his PhD degree in Molecular Virology at the University of Massachusetts.  He received his postdoctoral training in Molecular Immunology at Yale University from 1996 to 2000, and joined the Department of Pathology at Case Western Reserve University as an assistant professor in 2000. He is currently a tenured Associate Professor of Pathology and Neurology and associate director of the National Prion Disease Pathology Surveillance Center at the School of Medicine, Case Western Reserve University.

Animal prions and their transmissions to humans

Prion diseases are a group of fatal transmissible protein misfolding diseases that require the cellular prion protein (PrP).  Prion diseases are known to affect humans and some mammals, including cattle, sheep/goats, cervids, mink, rodents, felines, and pigs.  Bovine spongiform encephalopathy (BSE), or mad cow disease, is the prion disease in cattle.  The classic BSE strain is transmissible to humans, causing the variant CJD, but the human transmission risks of the less common atypical BSE strains were not clear.  Using humanized transgenic mouse models, we demonstrated that both L-type and H-type atypical BSE are transmissible to humans with unusual presentations.  We are further investigating the characteristics of atypical BSE transmissions in humans.  Chronic wasting disease (CWD) is the prion disease in free-ranging or farmed cervids, including deer, elk, moose, and reindeer. In USA and Canada, CWD is a widespread and expanding epidemic, resulting in significant and increasing human exposure to CWD.  However, the zoonotic risk of CWD prions remains uncertain and the characteristics of CWD infection in humans are still unknown. Using humanized and cervidized mouse models, we have discovered or achieved the following.  (1) Human exposure to CWD could lead to low rate clinical infection or asymptomatic carriers, the latter could potentially cause secondary human-to-human CWD prion transmissions. (2) Zoonotic CWD cases may phenotypically mimic sCJDMM1, the most common human prion disease. (3) High transmissibility with CWD-like phenotypes in cervidized transgenic mice could be used as a marker for distinguishing zoonotic cases of CWD infection in humans. (4) The cervid-to-human transmission barrier is prion strain dependent and highly zoonotic CWD strain is possible.  (5) Two amino acid residues of cervid PrP are critical for the observed CWD-to-human transmission barrier.  We are working to further investigate the strain dependence of CWD-to-human transmissions and the risk of indirect CWD transmission to humans via another animal species, identify the first human CWD cases, and establish diagnostic assays for identification and surveillance of CWD infection in humans.  We are also exploring the possibility of prion diseases in animal species that are currently thought to be prion-free.

Prions had been reported in skin of prion-affected animals, but whether prions also exist in the skin of sCJD patients was not known.  In close collaborations with Drs. Wenquan Zou and Byron Caughey, we found that skin from sCJD patients contain infectious prions that can be transmitted to humanized transgenic mice, which raises the concern for skin-mediated prion transmission. We then discovered that prion-seeding activity can be detected in skin samples of hamster or humanized transgenic mice in preclinical and early clinical stages.  We are assessing the iatrogenic transmission risk of skin prions from CJD patients.

Sporadic CJD (sCJD) is the most common prion diseases in humans and there are huge diversity and heterogeneity in sCJD phenotypes. Practically nothing is known about the etiology of sCJD. We aim to shed some light on the etiology of sCJD. The human prion protein gene (PRNP) has an octarepeat region that normally contains 4-5 octapeptide repeats. It has been reported that any increase of the octarepeat numbers to six or more or a decrease of the octarepeat number to three will lead to prion diseases in humans; numerous point-mutations in the PRNP coding region also leads to genetic prion diseases. We hypothesize that, the abundance of somatic point mutations and/or octarepeat mutations in the PRNP gene increases with aging in brain cells, and some of the mutated brain cells will start spontaneous de novo prion replication to initiate sCJD. We have shown that the octarepeat region of the human PRNP gene is prone to expand or contract when subjected to PCR amplification in vitro and when replicated in E. coli. We are trying to establish highly specific and sensitive assays that are adequate for reliable detection of rare somatic pathogenic octarepeat/point mutations of the PRNP gene in brain cells from aged human subjects. We will use these assays to measure and compare the frequency of somatic PRNP ORF octarepeat/point mutations in brain cells from young and aged individuals and age-matched sCJD and apparently healthy non-CJD controls, with the goal of establishing a direct correlation between higher frequencies of somatic PRNP ORF mutations and sCJD.

The PrP level has been reported to be elevated in the muscles from patients with a series of muscle diseases as well as from several animal models for muscle diseases, but the role of PrP in muscular diseases was unclear. We demonstrated that over-expression of wild type PrP in the skeletal muscles alone is sufficient to cause a myopathy, and the disease is correlated with preferential accumulation of PrP C1 fragment in skeletal muscle cells. Further experiments using microarray and other tools revealed that the PrP-mediated myopathy involves the p53 pathways.  We are expanding our efforts to understand the roles and underlying mechanisms of the normal cellular PrP in muscle biology and muscle and nervous system disorders.

Development of gene therapies for cancer, diabetes and brain diseases

We have embarked on a new direction on skeletal muscle-based gene and stem cell therapies for cancers, diabetes, and neurodegenerative diseases.