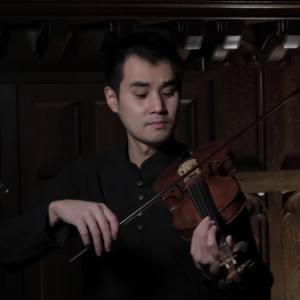 From Diminutions to the Birth of the Sonata: Hearing Wonder in Early 17th-Century Instrumental Music
FREE VIRTUAL EVENT

This event will include a Lecture-Recital presentation and Q+A component. Join us by using Zoom at the provided link.

Addi Liu is a Doctor of Musical Arts student in Historical Performance Practice at Case Western Reserve University. Noted for his “vivid” playing (San Francisco Classical Music Examiner), he can be heard on RTHK Radio 4 (Hong Kong) and has appeared in performances with ensembles such as American Bach Soloists, Apollo’s Fire, Les Délices, and the San Francisco-based early music ensemble MUSA, of which he is a founding member.

A native of Hong Kong and San Francisco, he studied with Jodi Levitz and Elizabeth Blumenstock at the San Francisco Conservatory of Music where he graduated with a BM and MM with a Departmental Award in Excellence. He is an alumnus of the Aspen Music Festival, Amherst Early Music Festival, American Bach Soloists Academy, Tafelmusik Baroque Summer and Winter Institutes, SFEMS Baroque and Classical Workshops, and La Petite Bande Summer Academy. His research interests include the transmission of music theory between China and West, in particularly the Jesuit missions in 17th- and 18th-century Beijing. He has presented at the McGill Music Graduate Students’ Society Symposium and Musicking: Cultural Considerations conference.