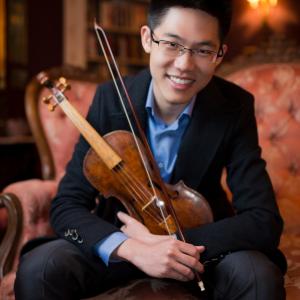 This event will include a Lecture-Recital performance followed by a Q+A component. Join us by using the Zoom meeting link below. Guests will enter and remain in the waiting room before the start of the event.

Check back for program information.

Singaporean violinist Alan Choo has established himself on the global stage as a leading soloist, chamber musician and historical specialist. He made his solo debut at the Tanglewood and Ravinia Music Festivals 2017 with Apollo's Fire, the Grammy Award-winning baroque orchestra in the United States with which he currently serves as Artistic Leadership Fellow and takes on soloist, concertmaster and guest director roles. He is also Founder and Artistic Director of Red Dot Baroque, Singapore’s first professional period ensemble, which has enjoyed multiple sold-out concerts and critical acclaim since their formation in August 2018. In May 2019 he was invited as guest concertmaster and soloist with the Shanghai Camerata, and has also appeared as soloist with the St. Petersburg Symphony Orchestra, Tafelmusik Winter Institute Orchestra, Singapore Symphony Orchestra, Singapore Chinese Orchestra, Orchestra of the Music Makers and more.

Alan's awards include the Early Music Award 2016 from Peabody Conservatory, the Paul Abisheganaden Grant for Artistic Excellence 2015, the Goh Soon Tioe Centenary Award 2014, the Grace Clagett Ranney Prize in Chamber Music 2014 and 1st prize in the National Piano and Violin Competition 2011, Artist Category. He has conducted masterclasses and workshops at the Cleveland Institute of Music, Baldwin-Wallace College, Bowling Green State University and Yong Siew Toh Conservatory, and is currently finishing his DMA in Historical Performance Practice at Case Western Reserve University under the tutelage of Julie Andrijeski.