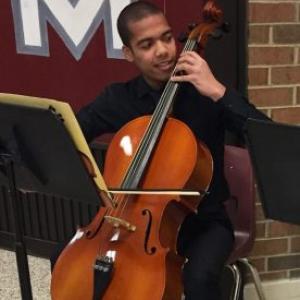 A talented cellist whose diverse musical influences ranged from classical to rock to hip hop, rising second-year music student Micco Daniels passed away recently. He was 19.

A 2019 graduate of Mount Vernon High School in Alexandria, Virginia, Daniels was introduced to Case Western Reserve University by his high school orchestra director, Alberto Rodriguez (CWRU ‘15). Faculty members and friends from CWRU and the Cleveland Institute of Music remember Daniels as a talented musician with a calming presence and good sense of humor.

Eric Charnofsky (Instructor, Coordinator of Undergraduate Studies, Department of Music): I didn’t know Micco personally and only had interactions with him in my Administrative role for the Department of Music. After reading these statements by students and colleagues, and speaking with people who knew and worked with Micco, I feel as though I did know him. He clearly had a kind heart, a sense of humor, and talent, and was able to bond well with his peers and instructors. He will be greatly missed at CWRU.

Alberto Rodriguez: My name is Alberto Rodriguez (CWRU/CIM B.S. Music Education ’15) and I had the honor and privilege of working with Micco Daniels as his orchestra director at Mount Vernon High School for two years. Micco was a brilliant student, cellist, beat producer, comedian, Smash Bros. player, brother, son, friend, and human being. It was the greatest honor of my career when he told me he chose to follow some of my footsteps at CWRU, and I will never forget the bond we shared through hours playing music together and discussing every topic under the sun. I loved Micco, as did so many others. His loss weighs not only heavily on me, but the MVHS and CWRU communities. He brought light, laughter, wisdom, and kindness to everyone he touched, and he will be missed greatly. I send my deepest condolences to the family, his friends, and his professors and mentors at CWRU.

Iara Al-Schamma (recent computer science and music major, cellist): Micco, without fail, always managed to put a smile on my face. I remember first meeting him as I walked out of my cello lesson and he was walking in, both of us not really knowing how to introduce ourselves to the other. Every week from then on, Micco and I walked past each other in the hallways and talked, but never about music — He told me about his favorite pair of sweatpants, his love for naps, and how college was not as he expected it to be. I got to know Micco for who he was and not the instrument he played, and I am so fortunate for that. Although he may not have realized it, he was also very good at putting smiles on the orchestra’s face when he spoke — he had a good sense of humor.

While our time with Micco has been cut short, I will always remember him to be the quiet, humble, easy-going, funny, and talented cellist that he was. It was a blessing to have met him, and I hope he rests in peace.

Robert Hammond (computer science and music major, percussionist): I got to know Micco around the beginning of orientation last year, and I was able to relate with him pretty quickly since we had a good bit in common; we were both Black freshmen planning to major in computer science and music. We were in the same music theory class for all of my freshman year, and I sat next to him in the second semester, so I had the opportunity to get to know him a decent bit, both in and out of class. Everything about Micco’s demeanor was very calming. His voice was always relaxed and measured, and he never seemed to get overly worried. Everything about his personality and attitude elicited a feeling of ‘chill’. Though I didn’t know him for a very long time, I definitely won’t forget many of the memories that we’ve shared. My deepest condolences go to Micco’s family, friends, and anyone else affected by his passing.

Anonymous student submission: I barely knew Micco, but I’d briefly spoken to him a few times. I’d seen him in Denison, either in the halls, in rehearsal, or in a practice room. One time, a group I was in needed someone to take our photo with a phone. As I walked into Denison from the outside, Micco was the first person I could see. He was diligently practicing, so I felt awkward asking. Without hesitation, he put down his cello and came outside to take our photo. I remember thinking at the time, ‘what a nice person. I should get to know him better.’

It’s people like Micco that make CWRU’s music community what it is. People who will put aside their daily life to be selfless for people they barely know. It saddens me to know that the community will be without Micco from now on. I wish all the best for his family and friends, and I give them my condolences in this tough time.

Venice Villescas (music major, flutist): Micco was always so sweet. I had him in one of my chamber groups. Every time I came in he would say hello to me, and whenever he saw me on campus he would join me and talk. It might sound kind of small, but it really meant a lot to me because I was not very outgoing and didn’t really know anyone. It completely breaks my heart knowing that he’s not with us anymore.

Dr. Sam Bivens (music theory faculty, Cleveland Institute of Music): Micco: You were kind, you were patient, you were positive, and you were one heck of a hard worker. You were a wonderful student and colleague, and my life is better for having met you. I wish so much we all could have experienced your future successes. I will miss you and think of you often.

Dr. Kathleen Horvath (CWRU’s Director of Orchestras and Music Education Professor): As a professor who has been at CWRU for 20 years it has been my privilege to work with wonderful students who enter as freshmen and emerge as fully formed adults at graduation. Micco was a student who just became part of our community and was beginning to grow into himself.  He was smart, funny, caring, chill, and very creative.  Even though he was only here for a short time he left an indelible impression on all of us.  May we take it and honor him by giving it to someone else.

The Daily will share information about memorial services should details become available.