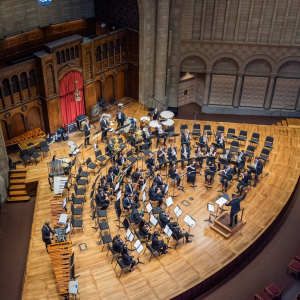 The CWRU Department of Music is very pleased to announce our Symphonic Winds has been selected to perform at the 2022 Ohio Music Education Association Professional Development Conference.

"Being selected following a blind recording review is a testament to the hard work, dedication, and musicality of our students who have earned this honor," Dr. Ryan Scherber.

The OMEA PDC will occur February 3-5, 2022 in downtown Cleveland, Ohio. The specific performing date and time will be announced in September.

Please check our Upcoming Events for the event listing. We hope you will consider attending!

The Case Western Reserve University Symphonic Winds, under direction of Dr. Ryan Scherber, is the umbrella organization for all wind band ensembles open to CWRU and CIM wind, brass, and percussion players. Both undergraduate and graduate students are welcome to join as well as staff or faculty. We generally perform for two to three times per semester at the Maltz Performing Arts Center as part of the Silver Hall Concert Series. Participation is primarily within the main Symphonic Winds Ensemble, a traditional concert band setting open to all interested musicians. At certain times, a select group of musicians may be selected to participate in the CWRU Chamber Winds or CWRU Wind Orchestra when needed based on the repertoire to be performed. These ensembles are traditionally one player per part and rehearse during the same rehearsal times as Symphonic Winds when these ensembles are in operation. An audition is required for seating and section placement each academic year.

The Ohio Music Education Association (OMEA) is the principal organization in Ohio promoting music education in elementary and secondary schools as well as colleges and universities. OMEA is one of the largest of the 52 federated state affiliates of NafME, The National Association for Music Education. OMEA members are involved at all levels of music education, serving more than 1.7 million public school students in 613 public school districts and 108 college and universities in Ohio.

On June 6, 1924 in Fostoria, Ohio, the Ohio School Band Association was formed by fourteen band directors to “promote high school band contests” in Ohio. By 1929, the OSBA had changed its name to the Ohio School Band and Orchestra Association and expanded its emphasis to include orchestra. In 1932, all aspects of music education were included and the Ohio Music Education Association was formed. The Ohio Music Education Association celebrated its 75th Anniversary in 2007, making it one of the oldest music education associations in the country.