In November 2011, plans to convert the root cellar located west of the Main Barn into a mushroom production facility and by spring of 2012 the transformation was completed enough to allow for a trial run of mushrooms. 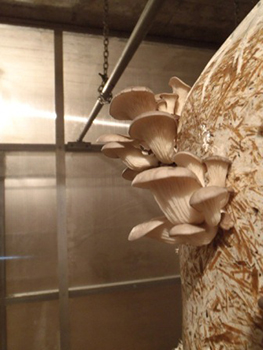 The three rooms are constructed out of double-walled plastic walls with galvanized steel structuring for ease of cleaning and longevity. Farthest from the entrance is the spawning room, equipped with heat and a positive pressure fan system to maintain optimal growing temperatures and a sterile environment for the spores. The other two rooms are for production.

Once the tubes fully spore and the colony is strong enough to fight off other cotangents, the mushrooms are moved to one of the other less sterile rooms. They grow in plastic tubes filled with sterilized straw that hang from the ceiling and holes in the bags allow the mushrooms to grow. These rooms have a negative pressure fan system the pulls air across the tubes to give the mushrooms enough air to grow. The negative pressure fan system for these rooms also helps enforce the positive pressure room by pulling air through any holes in the walls that we may have missed. 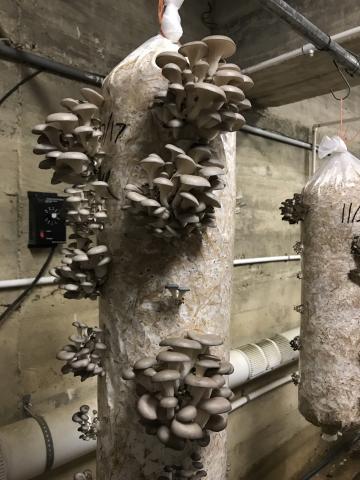 From May 2014 to December 2014 our staff harvested over 700 lbs. thanks for a collaboration with local mushroom producer Mike Nagy. Mr. Nagy has been our mentor and guide to improve the mushroom production at the Farm.

In March 2015, under the coordination and guidance of Dr. Joseph Koonce, a monitor system was installed at the Mushroom Cellar. This system allows continuous data collection on temperature, humidity and CO2 levels to maintain optimal conditions on the production rooms to enhance our mushroom production.

Since 2019, we harvest between 25 to 50 lbs per week. The type of oyster mushroom, blue, brown or white, varies with the season.