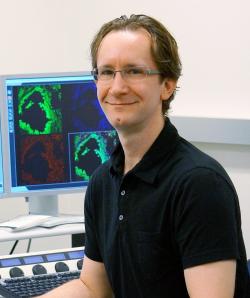 Dr. Brian Cobb graduated with a B.S. in Biochemistry from the University of Oklahoma in 1995. The next five years were spent at Washington University, St. Louis, where he received his Ph.D. in Biochemistry studying the macromolecular interactions of the lens protein alpha crystallin with the plasma membrane. His three years as a postdoctoral fellow was spent as a dual appointment in the Department of Microbiology and Molecular Genetics and the Department of Medicine at Harvard Medical School (2001-04) working with Dennis Kasper on the innate and adaptive immune responses to commensal bacteria-derived capsular polysaccharides. He continued at Harvard for another year as an Instructor before coming to Case School of Medicine in 2005 where he is a Professor in the Department of Pathology, and Director of the Immunology Training Program.

My lab focuses on the role of microbial and host glycans on immune regulation and inflammatory disease.

The Cobb lab is broadly focused on immune regulation and the role that carbohydrates (microbial and host) play in related mechanisms. As such, we work at the interface of glycobiology and immunology.

The lab can be roughly broken into two areas of research: