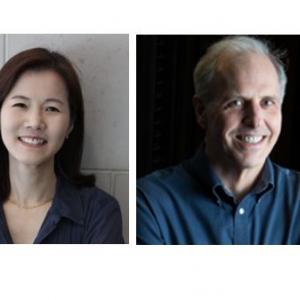 “This international consortium demonstrates the power of team science. This is the scale needed to uncover the genetic architecture of complex diseases,” ...

He is co-leader of the research team that secured an additional $2 million from the National Institutes of Health (NIH) to advance genetic research in age-related macular degeneration (AMD), the leading cause of visual impairment or blindness in the elderly.

This latest round of NIH funding builds on more than 15 years of work that has resulted in identifying genes and genetic pathways associated to better manage and treat the condition.

Yeunjoo Song, an instructor with PQHS, is an integral part of this effort, responsible for data management, analysis, and visualization. Also serving as co-principal investigators are Margaret Pericak-Vance and Susan Blanton at the John P. Hussman Institute for Human Genomics at the University of Miami Miller School of Medicine. Iris Heid at the University of Regensburg, Germany, is also on the leadership team.

The prevalence of AMD increases significantly in people older than 60, reaching as high as 30% of people over age 75 worldwide. Other than age, genetic variation is the strongest risk factor for AMD, while smoking and a high-fat diet are also contributing factors.

The funding from NIH’s National Eye Institute will support detailed genetic analysis on data assembled by the International AMD Genomics Consortium (IAMDGC), a group of more than 30 institutions that share genetic information from more than 100,000 people worldwide. The scale of research made possible through this consortium is essential in uncovering novel gene locations or pathways, given the complexity of the disease and the number of contributing genetic variables.

As with all research that Haines leads, the consortium will focus on diversity among study subjects. This grant covers the first trans-ethnic analysis of AMD, drawing on data from subjects with ancestries other than Northern/Western Europeans. The existing and new samples include participants from African American, Hispanic, and East Asian populations. Some of the additional subject samples are acquired from ongoing recruitment efforts and from new research institutions that are continuously joining the IAMDGC and incorporating their data into the collection.

Additionally, the study will draw on descriptive data, including environmental and behavioral risk factors, which is highly unusual given the complexities of using a wide variety of clinical notes and/or electronic health records from so many contributing organizations.