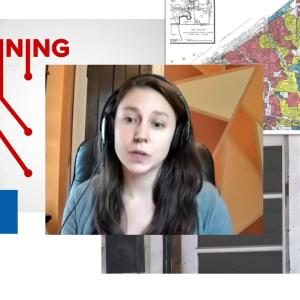 A policy put in place generations ago still has lasting impacts on the social and economic well-being of Blacks to this day.

According to a University of California at Berkeley study, Cleveland is the sixth-most-segregated major city in the country, with most people of color living in east side neighborhoods facing extreme disadvantages. Visit any number of Cleveland neighborhoods, and you'll see the remnants.

Redlining was a systemic denial of services that began in the 1930s, primarily affecting people of color with their neighborhoods shaded on maps.

WKYC’s Turning Point program recently produced a series on redlining and systemic racism - and how Cleveland is impacted. Gwen Donley, PhD Candidate, commented as part of their segment on redlining.

Redlining not only robbed Blacks of homeownership but its lasting impact is felt in other areas — dangerous lead levels in homes, lack of reliable internet access, even health care disparities.

"So things like asthma, maternal death after birth, certain types of cancers are actually much higher in historically redlined neighborhoods," Donley said. "This is one of the most clearly intentional cases of discriminatory housing policy that we can see ever, and they saved in their notes, 'This neighborhood is mostly Black. Therefore, we are redlining it.'"

And note all the parts in the series:

A conversation with ‘The Sum of Us’ author Heather McGhee

The history of racism at public swimming pools