Mark Cameron, PhD, comments on the differences in the US and Canadian experience with COVID-19 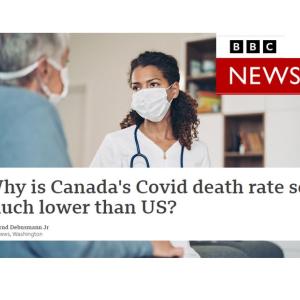 "… the reproduction rate of the virus has been exactly the same…. but Canada's per capita case rate has generally been less than half that of the US".

Mark Cameron, PhD, recently commented to the BBC on how US residents fare compared to their Canadian neighbors.

As the BBC authors note, there is a staggering difference in how many more Americans have died because of Covid compared to Canadians…. both in absolute numbers and as the ratio of deaths per million inhabitants.

The total death toll of the pandemic in the US stands at about 919,000, compared to 35,500 in Canada, according to Johns Hopkins University.

While the population of the US - over 332.4 million - is more than eight times Canada's 38.2 million, its ratio of deaths per million inhabitants still far surpasses Canada's.
Another set of statistics compiled by Johns Hopkins shows that as of 11 February [2022], 279 US residents have died of Covid per 100,000, compared to about 94 in Canada.

Far more Americans were ending up in intensive care as well. Last month during the Omicron wave, the number peaked at nearly 79 per million when Canada's was 32 per million.

"That has to be a function of healthcare systems. [Canada] is intervening quicker, and in different ways, than the US," Dr. Cameron said. "That's where severe cases are ending up when other approaches and interventions have failed."