Michelle B. Jackson and Gwendolyn Garth point to opportunities to address food systems challenges in Cleveland. 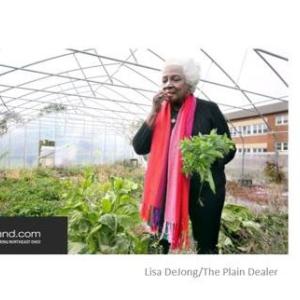 “Hunger in Cleveland is a smoldering public health crisis driven by lack of nutrition security and food sovereignty. Case Western Reserve University researchers’ analysis of Greater Cleveland Food Bank data revealed that one out of two Clevelanders used food pantries in 2019. In 2020, the year of the pandemic, that number jumped to 70%.”

Michelle B. Jackson, a Community Researcher at the Swetland Center for Environmental Health at CWRU, and Gwendolyn Garth, activist and founding member of the Central-Kinsman Neighborhood Up Network, published an op-ed on behalf of a collaborative group of food justice advocates in The Plain Dealer and on Cleveland.com about food systems challenges facing the city of Cleveland and their recommendations for the new Cleveland mayor and administration.