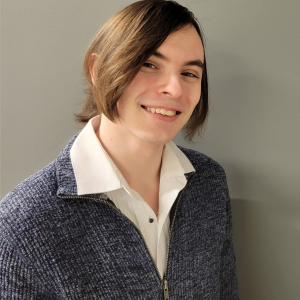 Joshua Estok, a 4th-year undergraduate student at Cleveland State University School of Music in Cleveland, Ohio, has been announced as winner of the 2022 Choral Composition Contest in the Case Western Reserve University Department of Music. The award is given annually to a composer between ages 18 and 25 enrolled in an Ohio college/university who has written and submitted a musical composition for the Case Concert Choir.

Read more about the 2022 competition.

Estok won for his work "A Jelly-Fish," which was selected by a panel of judges from numerous compelling entries. The Case Concert Choir, an ensemble dedicated to championing new and diverse choral music and comprised of students from varied majors and programs, will premier Estok's work as part of their Choral Spectrum concert on February 17, 2023, at 7:30 PM, at the Maltz Performing Arts Center.

Joshua Estok (b. 2001) is pursuing a Bachelor of Music in Composition and a Bachelor of Dance. As a composer, Estok has studied the art of composition throughout history, creating works for soloists, chamber ensembles, and large ensembles. He often finds that his studies in dance influence his approach to music and his compositions. Estok has also studied electronic and computer music in composing electro-acoustic, multimedia, and fully synthesized works. Estok has a penchant for collaboration and combining his other interests with composition. As a result, he intends to combine his knowledge of music composition and dance by cooperating with choreographers in creating music for new dance works.