A Glimpse into One Student's Medical Mission to the Philippines 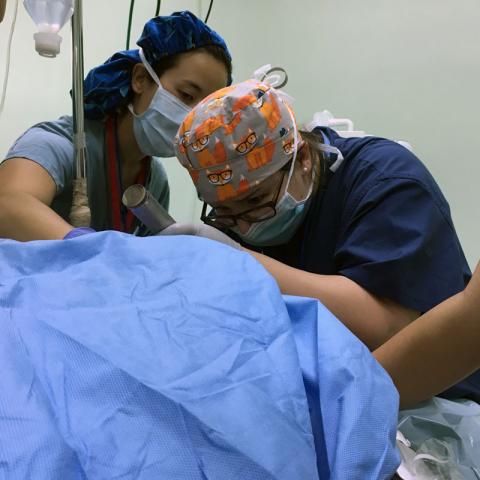 Archambeault’s trip started with a flight from Washington, D.C. to Seoul, South Korea. There was a brief layover before she flew to Manila, Philippines. She spent a few nights in Manila before taking a small charter plane to the city of Sorsogon.

"It was pretty rainy and humid during my time there, Archambeault says. We got a few glimpses of sunshine and warm weather occasionally. I had anticipated the weather to be a lot warmer, but it was fairly cool in the operating room."

In addition to the rainy weather, the medical team also had to be aware of the nearby volcano. Archambeault and her team kept in close contact with the Philippine Volcanology Team. Despite the team’s initial worry, the volcano ended up impacting them very little during their trip. With the mission site being located several kilometers away from the volcano, the safety of the team and their patients was ensured.

Archambeault and the rest of the team dealt mostly with same-day surgeries. Although procedures such as hernia repair and hemorrhoid removals were common, they also handled their fair share of more advanced procedures such as thyroidectomies, cleft palate repairs and hysterectomies.

Not surprisingly, this trip kept Archambeault very busy. Many nights she came home late from the OR. Any free time she had was spent reviewing questions for her certifying examination and catching up on sleep.

When it came to the cuisine, Archambeault ended up being pleasantly surprised. "The cuisine was fairly balanced and we were offered many proteins, with beef being the most common. One morning we were served fish, eggs, rolls, and some rice. Considering I’m a pescatarian, this was a very welcomed treat!"

Archambeault enjoyed every moment of her medical mission trip. The following questions reveal a little more about her time in the Philippines.

1. Why did you want to go on the mission to the Philippines?

I had never been on a medical mission trip but had always wanted to be a part of one. I have also never been abroad, and I wanted a chance to experience healthcare in a different environment.

2. How did this mission test your skills as a healthcare provider?

This mission definitely provided a test of my clinical decision making and technical capabilities. Resource management was also a much bigger part of my decision making than usual. Our resources were extremely limited so we had to factor that into every choice that we made.

3. Of the challenges you faced, which one was the hardest to overcome?

I think the hardest challenge for me to overcome was getting comfortable with improvisation. Since we didn’t have much of the standard equipment, monitors, or resources that we normally do, our team had to come up with creative solutions for situations we normally take for granted. For example, we didn’t have a standard anesthesia monitor [an end-tidal CO2 monitor which confirms the placement of the breathing tube as well as confirming that the patient is effectively being ventilated]. Instead we had to resort to the basics of monitoring chest rise and watching the breathing bag inflate and deflate to confirm that our patients were breathing regularly.

4. How has your training prepared you for this?

CWRU’s program prepares us for dealing with any kind of patient or case that’s thrown our way. Based on all the training I received, I felt that I was very well prepared for this mission trip.

5. What was your best experience (or patient story)?

There were several patients and their families that asked if they could take a picture with me. That’s something that never really happens in U.S. recovery rooms. It made me feel like a rock star!

6. What did this experience teach you that you will use later on?

I had to learn to get comfortable with improvisation. I’m definitely much more comfortable with it now than I was previously. I feel that if I were to have to “MacGyver” something in the OR due to equipment failure, I would easily be able to do so.

I was also made very aware of just how much we waste in the OR. Since coming back from the mission trip, I’ve looked for different ways I can reduce the waste generated per patient without compromising patient safety.