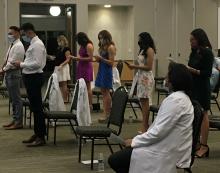 The Houston MSA first-year students were honored with their white coats this past Friday, November 13. The ceremony was originally planned for earlier this year but was cancelled due to the Pandemic. The event took place at the Denton A. Cooley, MD and Ralph C. Cooley, DDS University Life Center. The ceremony was live streamed for family and friends who were not able to attend due to safety restrictions. Dr. Rhashedah Ekeoduru, Houston Medical Director, addressed the state of affairs. Students read out loud the oath, led by Tom Kennelly, then the white coats were placed on each student by Houston’s Program Director, Ken Maloney.

The importance of the white coat was addressed by Dr. Vanga. “The actual white coat itself has been in use for about a 100 years. The black attire was considered formal as medical encounters were deemed serious and formal matters.  Coincidentally, this was also when medicine was in its dark age period.  Seeking medical guidance was often a last resort and often a precursor to death. At the turn of the century, all of this changed. Medicine and science, in general, had significantly advanced.  And for hygienic purposes, the attire had shifted to white.  It is simply easier to identify a soiled white garment versus a black.  And this is how the white coat originated. Over the decades, the white coat has turned into a symbol and a representation.  It represents a commitment to science and a commitment to helping your fellow man (or woman).  It also represents a commitment to a code of ethics and a value of humanism.”

We warmly congratulate our class of 2022 and are proud to support them as they begin their medical careers at a pivotal time in our country’s history.