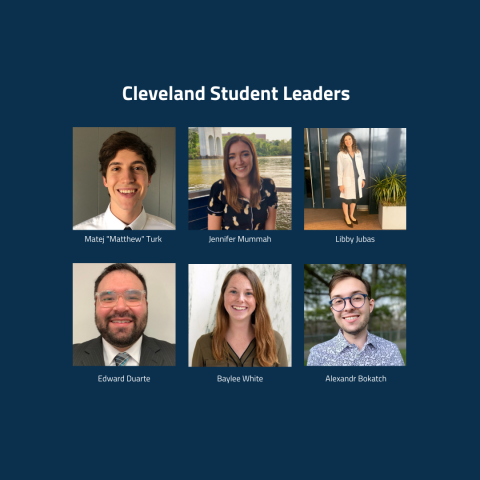 Introducing Cleveland Student Leaders for the Class of 2022

Each year, rising first-years in the Master of Science in Anesthesia Program have the opportunity to take on leadership roles at their respective locations of study in Cleveland, Ohio; Houston, Texas; and Washington, D.C.

The MSA Network is pleased to announce the following students have been selected for the Cleveland Class of 2022:

Libby graduated from Washington University in St Louis and studied Global Health and Environment. While studying, she enjoys going to the metro parks and seeing all the greenery Cleveland has to offer.

Baylee always knew she wanted to work in healthcare but wasn't quite sure where she fit in. She found her place as a CAA when her friend let her shadow them in the OR and fell in love with the patient care, hands-on duties, and variability in cases.

Alexandr chose CWRU's MSA program because of its emphasis on early exposure in the clinical setting and because he felt a sense of community while interviewing. His favorite part of the program is knowing that the program has set him up for success and encourages him to not doubt his abilities.

Edward spent time teaching high school mathematics and actually found the CAA profession by helping his students research different medical professions. His advice to those interested is that despite any obstacles prior to starting "As long as you are passionate about becoming an Anesthesiologist Assistant, you can make up for that very quickly."

Matthew is a Cleveland native who found his way to the MSA program while working at Southwest General. He recommends Little Italy pasta since it is "unmatched" and his favorite quote is "You miss 100% of the shots you don't take" by Wayne Gretzky.

Jennifer graduated from Miami University and spent some time working in phlebotomy, a skill she found useful before starting the program. One of her favorite things to do with her classmates is to play volleyball at Whiskey Island when the weather is nice.