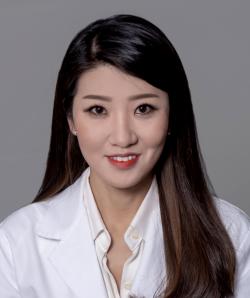 Dr. JungA ‘Alexa’ Woo completed her master’s degree at Seoul National University in South Korea and received her Ph.D. in Neuroscience from the University of South Florida in 2015. She completed her post-doctoral training with Dr. Stephen Liggett, Vice Dean for Research at USF Health for two years. In 2017, Dr. Woo became an Assistant Professor at the University of South Florida, College of Medicine. Three years after the completion of her Ph.D., she received her first NIH R01 grant and two other research grants from the State of Florida, which allowed her lab to study the role of beta-arrestins in tau pathology. Dr. Woo joined the Department of Pathology at Case Western Reserve University School of Medicine in 2021 as an Assistant Professor. Her research focuses on the G protein-coupled receptor and beta-arrestin signaling in neurodegenerative diseases, including Alzheimer’s disease (AD), Frontotemporal dementia (FTD), Amyotrophic lateral sclerosis (ALS), and Parkinson’s disease (PD). She also works on the pathological role of the mitochondrial protein CHCHD2 in Lewy body disorders (LBD).

Tau pathology is a prevailing hallmark of Alzheimer’s disease and multiple other neurodegenerative diseases. Dr. Woo’s research focuses on understanding how beta-arrestins, proteins known to regulate various neuronal signaling receptors, contribute to neurodegeneration in Alzheimer’s disease (AD) and related dementias (ADRD). Dr. Woo’s laboratory first identified beta-arrestin2 to be significantly increased in brains of FTD patients and functions as a key positive regulator of tau pathology. Her team also demonstrated that beta-arrestin2 oligomers but not monomers drive tauopathy in vivo.

More than 50% of AD patients have comorbidities, including TDP-43 and Lewy body pathologies, which are hallmarks of FTD and PD, respectively. Beta-arrestin1 and beta-arrestin2 are ubiquitously expressed but show the highest expression in brain and spleen. While beta-arrestin1 and beta-arrestin2 share high sequence similarity (78% identical) and show functional overlap, significant differences exist. The Woo lab is interested in further dissecting the molecular mechanisms by which beta-arrestin1 and beta-arrestin2 similarly or differentially drive multiple pathologies in ADRDs. We use interdisciplinary approaches from cell biology of neurons, live-cell imaging of genetically encoded fluorescent reporters, genetic models of AD/ADRD, recombinant AAVs, electrophysiology, and behavior to delve into an unexplored role of beta-arrestins in neurodegeneration in AD and ADRDs. Utilizing these state-of-art techniques, we aim to identify novel molecular insights to beta-arrestin1/2 activity, which enables us to find multiple ways of target beta-arrestins to mitigate the pathogenesis in ADRDs. As oligomerized but not monomeric beta-arrestin2 drives tauopathy, one approach the Woo lab is currently undertaking is the identification and characterization of small molecular inhibitors of beta-arrestin oligomerization as a therapeutic approach to mitigate tauopathy and possibly other signature brain pathologies.

Rare mutations in the gene coding for the mitochondrial protein CHCHD2 are associated with PD and other Lewy body disorders. Utilizing a multidisciplinary approach in vitro and in vivo, we aim to unveil how pathological CHCHD2 contributes to the pathogenesis of PD and other Lewy body disorders. In collaboration with the Kang lab, we are also interested in identifying the similarities and differences between pathological CHCHD2 versus its homolog CHCHD10, the latter which is mutated in familial and sporadic FTD and ALS.