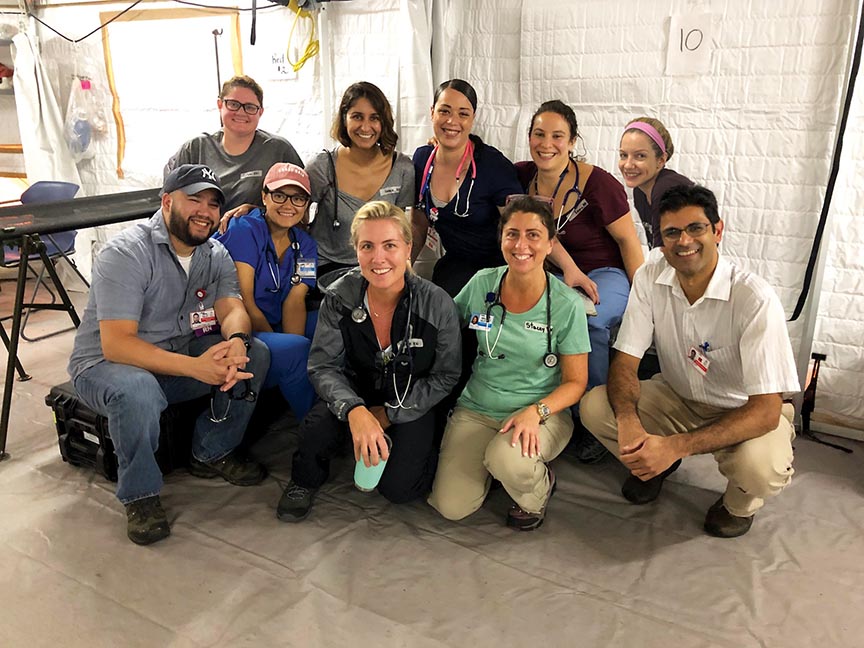 "In the Peace Corps, I had been sent to areas without running water--or other things we take for granted--but you can't be fully prepared to see so many homes leveled," says Mahoney, a DNP student at Frances Payne Bolton School of Nursing. "It was heartbreaking."

As part of a team of three doctors and seven nurses sent in October, Mahoney says they found quick camaraderie. The team had 16-hour work days and more than 1,600 patients during the two-week trip.

"You become a family for that time," she says.

Most of the injuries didn't happen during the hurricane, but from residents trying to clean up their homes or properties.

"You wouldn't think of it, but many injuries are going to be from clearing from a machete or a chainsaw," she says. "One gentlemen even fell off a roof and had a huge laceration in his leg."

One moment that stood out to Mahoney was when a woman thanked her through a translator for taking time away from her family.

"That she could think of what we were giving up at a time she had lost so much, that just touches you."

Mahoney saw the experience as a lesson in how to make the best of a situation.

"You just realize how lucky we have it in our country," she says. "I've kept thinking that ever since we've been back."

Her thoughts haven't gone too far from her old team from Puerto Rico, either. They keep up with each other's lives through group texts.

"Some of them may be friends for the rest of my life," she says. "And the people in Puerto Rico, they taught us all what staying strong is truly about."