A Series of Firsts 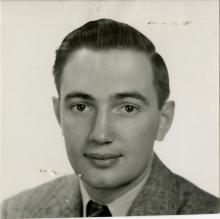 It was shortly after World War II, and nurses were in high demand in the United States. Getting a nursing job by mail or phone was “easy,” Swansburg recalled; in fact, Canadian nurses like himself often would fly to the United States, call a local hospital from the airport, and be hired over the phone to launch their careers.

So with his nursing diploma and offer letter in hand, Swansburg traveled from his home in Nova Scotia to Cleveland to work as a staff nurse at University Hospitals.

Before long, his charge nurse—and, it seemed, everyone on his floor—told him about the educational opportunities available next door at Case Western Reserve University.

Swansburg decided to join them, becoming the first male graduate of Frances Payne Bolton School of Nursing in 1952 when he earned his Bachelor of Science in Nursing.

From there, Swansburg’s career took off, with a series of quick promotions in hospital settings and then in the U.S. Air Force, where he spent 20 years before moving into a 35-year career in academia. He’s published more than 10 books on various aspects of nursing, from team-based care to leadership, budgeting to strategic career planning.

Swansburg attributed much of his career success to his time at Case Western Reserve: So many opportunities, Swansburg said, opened because he held a bachelor’s degree.

It’s part of the reason he gives so generously each year to the School of Nursing—the other being his desire to help others, a principle that has been the backbone of his career.

Swansburg’s entry into the BSN program at the Frances Payne Bolton School of Nursing propelled him into what he recalled as “a top-notch academic program where you had to really study to get through the courses.” It was the place he took his “first real science course” from a faculty member “who knew science backward, forward and upside down.”

Being the only male in the program was unremarkable—save for making newspaper headlines as “Mr. Nurse,” Swansburg recalled.

His degree helped him become charge nurse of a surgical unit at University Hospitals before moving with his wife, Laurel, to Newburgh, New York. Later, while at a New York State Nurses Association meeting, Swansburg was recruited to join the Air Force—becoming one of the first men to commissioned in the United States Army Nurse Corps.

While stationed in Germany, Swansburg led the training for all nurses and headed the emergency room. It was the first of a series of promotions in the Air Force that he earned, in small part, because leaders wanted “a person with a baccalaureate degree, and everywhere I went, I was the only one who had one,” Swansburg said. “I’ve always felt that all of this happened to me because I went through the program at Frances Payne Bolton School of Nursing.”

His technical prowess and leadership skills also played heavily into those career advances. Across two decades in the Air Force, Swansburg held a variety of ranks and roles—from lieutenant at Maxwell Air Force Base in Montgomerey, Alabama, to a flight nurse in Vietnam, to, finally, chief nurse and colonel at Keesler Medical Center, a military hospital in Biloxi, Mississippi.

But the constant moves and job changes took their toll on Swansburg. He retired from the military and transitioned into hospital administration and higher education—serving as a professor, administrator and vice president—to give back to the nursing field and help train the next generation of nurses.

Swansburg also taught—and, at age 98, continues to teach—nursing students through his series of books, which he’d started while preparing training manuals for military nurses on providing team-based care.

In fact, those manuals even taught some of his children; two of his three sons pursued careers as nurses. When one son walked into his classroom at University of Texas at Austin and saw the textbook, Swansburg recalled with a laugh, he said, “I can’t get away from him!”

Swansburg donates the proceeds from one of his books—the esteemed manual Management and Leadership for Nurse Managers—to the School of Nursing as a way to give back for what he’s earned across his career.

“The education that I got at Frances Payne Bolton,” Swansburg said, “was the kind that made me know how to solve problems and how to make systems work. That’s followed me throughout my career.”