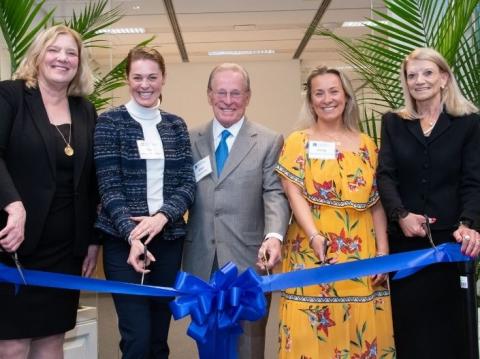 Ten years after its namesake first wrote about her vision for an institute to develop nurse leaders, the Marian K. Shaughnessy Nurse Leadership Academy gained a permanent home at the Health Education Campus of Case Western Reserve University and Cleveland Clinic.

“Together, [Marian and I] firmly believed in the power of nurses to improve healthcare for citizens everywhere,” said Fitzpatrick. “The Marian K. Shaughnessy Nurse Leadership Academy will continue its mission to advance the preparation of nurse leaders for education, scholarship, community service and healthcare delivery across the continuum of care.”

Inside the academy, a portrait of Shaughnessy seated in her meditation garden, unveiled that evening, welcomes guests at the entrance. Meeting spaces and offices are separated by frosted glass walls, allowing light from the floor-to-ceiling windows to filter through.

Carol M. Musil, PhD, RN, dean of the Frances Payne Bolton School of Nursing and Edward J. and Louise Mellen Professor of Nursing, remarked that the space, now housed in the same facility as all of the university’s other healthcare programs, reflected Shaughnessy’s vision: “forward thinking, inclusive, and most of all, collaborative.”

“Marian understood,” she continued, “that nurse leaders grow and thrive when given the opportunity to share ideas and solve problems—together.”

The celebration was the culmination of a decade of planning and implementation, which all began with a letter Shaughnessy penned for one of Fitzpatrick’s doctoral courses.

After a career as a practitioner, educator and administrator, Shaughnessy, who had earned her master’s degree at the school in 1985, returned to CWRU to earn her Doctor of Nursing Practice (DNP) in clinical leadership.

In the 2012 letter, dated one year in the future, she described an academy that would empower nurses in every sector by convening the field’s national and international leaders for continuing education, scholarship and research focused on the science of nurse leadership.

She and Fitzpatrick worked closely in the coming years to develop the concept, and in 2018—one year after Shaughnessy graduated with her DNP—a $5 million gift from Shaughnessy and her husband, Michael, made the Marian K. Shaughnessy Nurse Leadership Academy a reality.

The program grew quickly and, by 2020, the Shaughnessy Academy had launched an alumni lecture series and welcomed more than 70 nurses into the inaugural cohorts for its three core programs.

The curricula, developed in collaboration with faculty from Case Western Reserve University Weatherhead School of Management, are tailored to nurses at each level of their careers, covering topics such as healthcare finance, workforce planning, quality and safety competencies, public communication, and leading change.

One year after Marian Shaughnessy died in February 2020, her family donated $2.5 million in her honor to establish a permanent home for the academy.

When Michael Shaughnessy took to the podium on Thursday, his voice was full of emotion as he expressed his gratitude for everyone who supported his late wife’s dream. Their daughters, Anne Shaughnessy Marchetto and Kate Shaughnessy Biggar, followed, sharing fond memories of their mother’s time as a doctoral student at Case Western Reserve.

“I thought I was done with papers,” Biggar joked as she recalled helping her mother type the letter that would eventually become the framework for the Shaughnessy Academy.

“Now more than ever, nurses must seize the opportunity to be not just facilitators of healthcare, but rather leaders in their own right,” Marian wrote in 2012. “They will be the agents of change responsible for providing others with a lighted path for positive changes in the nursing field.”