Case Western Reserve alumna Marian Shaughnessy (NUR ’85, ’17) understood the power of nurses to transform health care. Her vision led to the creation of a leadership academy at Frances Payne Bolton School of Nursing named in her honor—and this week, in recognition of the first anniversary of Marian’s death, the Shaughnessy family announced a $2.5 million gift to establish a permanent home for the academy. 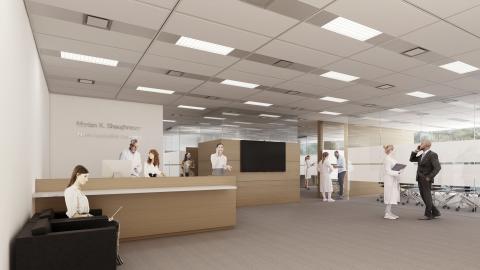 Located in the Sheila and Eric Samson Pavilion at the Health Education Campus of Case Western Reserve University and Cleveland Clinic, the Marian K. Shaughnessy Nurse Leadership Academy will offer a collaborative, welcoming and high-tech space for students and faculty to deepen their learning and research.

“Permanent space brings high visibility to our programs and students,” said Dr. Joyce Fitzpatrick, Distinguished University Professor, the Elizabeth Brooks Ford professor and  inaugural director of the Marian K. Shaughnessy Nurse Leadership Academy. “Scholars and fellows will now have a place to gather, and we will have additional space for our interprofessional research projects.”

The gift from Marian’s husband, Michael, and their daughters, Anne and Kate, is intended to help develop nurse leaders—like Shaughnessy—who can and should play a critical role in shaping health care policy.

“This generous gift provides a foundational working space for our leadership scholars,” said Carol Musil, dean of the school of nursing. “As we continue Marian’s vision for transformational nurse leadership, this new space will allow our students, faculty and community leaders to collaborate in an environment dedicated to idea sharing, innovation and leadership growth opportunities." 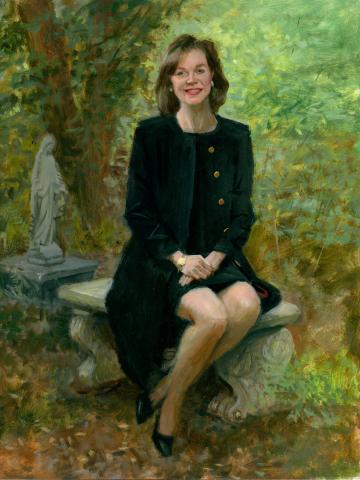 In 2013, while completing her Doctor of Nursing Practice degree, Shaughnessy recognized nurses were in positions to make impactful change but  rarely empowered or prepared to do so. As nurses were increasingly utilized on the frontline of health care delivery and addressing the day-to-day challenges of patient care, their voices remained relatively unheard in boardrooms or legislative hallways.

Shaughnessy’s experiences led her to draft a paper, for Professor Fitzpatrick’s class, that became a catalyst for redefining the role of nurses in determining health care policy. She wrote that the time had come for nurses to take a proactive role in redesigning and reforming health care—with an emphasis on making it more accessible, patient-centered, cost-effective and quality-driven. In the years that followed, Shaughnessy and Fitzpatrick collaborated to refine this vision.

In 2018, Marian and her husband, Michael, capitalized on the opportunity she articulated in her paper: Through their $5 million gift, the School of Nursing launched the Marian K. Shaughnessy Nurse Leadership Academy to develop and cultivate new and emerging leaders in the field of nursing. Since its debut a year-and-a-half ago, the academy has initiated three national programs—the Executive Leadership Post-Doctoral Program, the Miller Scholars Program and the Coldiron Senior Nurse Executive Fellowship—along with an alumni leadership lecture series.

From education to advocacy and collaboration, the academy gives voice to nurses so they can lead change. This leadership can be especially important at this moment in history as nurses work to provide world-class care amid a global pandemic.

“Marian Shaughnessy’s vision already has benefited nurse leaders across the world participating in academy programs,” Case Western Reserve University Interim President Scott Cowen said. “This additional commitment will deepen and extend her legacy in transforming health care. We are deeply grateful to Marian’s husband, Michael, and her daughters, Anne and Katherine, for honoring her in such a meaningful way.”

Marian K. Shaughnessy was a nationally known nurse leader and philanthropist—holding leadership board positions in a wide number of Cleveland nonprofits and University Hospitals Cleveland Medical Center—in addition to serving on committees of many health care and nursing foundations, associations and academic institutions. 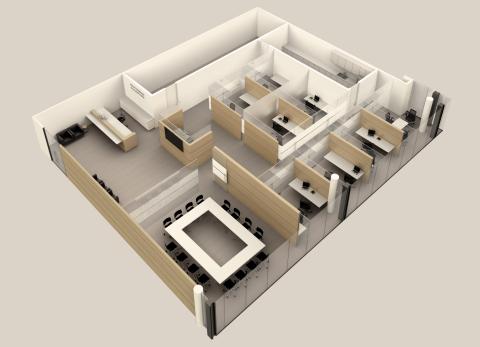 Leadership is a trait that has been deeply entwined in the culture of the Frances Payne Bolton School of Nursing at Case Western Reserve University since its launch in 1923. Beginning with its namesake—the first woman to be elected from Ohio to Congress—and running through outstanding alumni who have led major nursing organizations and universities around the world, the school has produced exceptional nurses who have transformed health care.

“We thank the Shaughnessy family for continuing Marian’s vision,” Fitzpatrick said, “which builds on the legacy of our school’s first benefactor, Frances Payne Bolton, and challenged us to create nursing’s leadership destination.”