Armed with a $3.4M grant, an alumna, assistant professor and new fellow of the American Academy of Nursing is on a mission to improve Black Americans’ health. 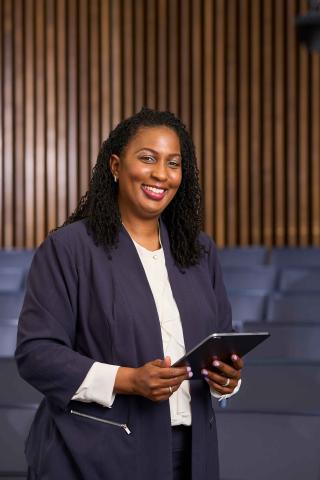 At her Orlando, Florida, home, Still changed dressings, administered medications and monitored vitals for her great-grandmother, who had advanced Alzheimer’s disease. It was a role Still immediately gravitated toward—she and each of her four siblings held various caregiving responsibilities—when a home health nurse showed the teenager the ins and outs of nursing care.

The experience transformed Still personally and professionally, propelling her on a path toward multiple academic degrees and a productive career in health disparities research.

Now, 25 years since being introduced to the field, the assistant professor at Frances Payne Bolton School of Nursing has earned national accolades—including induction this fall as a fellow of the American Academy of Nursing—for her work, through which she has one underlying goal: “to help individuals who look like me have better health.”

“The key to saving lives is to reduce cardiovascular risk by controlling high blood pressure in hypertensive individuals,” Still said, “and one way to do that is to help these individuals adhere to their prescribed treatment regimen.”

So Still and her multidisciplinary team, which includes researchers from Case Western Reserve University’s nursing, medical and engineering schools (see sidebar), are now enrolling study participants—namely 200 African Americans with hypertension who are over the age of 50 and have smartphones.

Research shows that Black patients often require more medications than individuals of other races and take as many as three different medicines to keep their blood pressure levels under control (defined as 130 mm Hg or less). So the researchers are focused on using a tech-based intervention, such as a smartphone app with medication reminders, a hypertension education resource site, and online counseling from registered nurses, to help patients remember to take their medication and, in turn, self-manage their high blood pressure.

“There is this belief that African Americans don’t use technology,” Still said. “But we know that’s not true.”

In fact, according to a 2018 Nielsen study, 90% of African Americans live in a household with a smartphone—a figure that is 6% higher than the total population—and they have the highest smartphone ownership and usage of any other racial demographic.

It’s a point Still and her team have studied on multiple projects, including two pilot studies—one in 2018-19 funded by the NIH/NINR and another in 2019–20 supported by the NIH/National Institute on Minority Health and Health Disparities. Working with community partners in Cleveland, such as the Cleveland Council of Black Nurses and American Heart Association, Still and her research team conducted interviews and focus groups in the community to determine better ways of helping Black patients manage hypertension—including through the use of technology. Among their many findings: Black Americans have the technology needed but don’t know how to use it for these purposes.

So, with this new study, Still and her team set out to expand upon those findings.

“We know there is a huge digital divide,” Still said. “So how can we train these patients, using the technology they have, to better their outcomes in terms of high blood pressure?”

Still said she hopes participants also will be able to better advocate for their own health care needs. Previous research, she explained, has shown that older Black patients are often prescribed only one medication for lowering their blood pressure, when evidence suggests two or three are needed.

By providing resources to assist these older Americans in controlling their blood pressure, Still hopes to also “empower patients to communicate more effectively about their condition to their providers” and, ultimately, reduce disparities in care.

Still’s study specifically focuses on Black Americans because of historic underrepresentation in clinical trials—and the skewed results, and longer-term decision making that can perpetuate disparities, it creates.

So with this latest project, Still’s team is meeting potential participants where they are to help them understand the importance of the study. They are partnering with local churches and community organizations in urban areas—an approach she has taken throughout her studies in the Cleveland area, since the first research project she helped lead.

After completing her PhD in nursing at Case Western Reserve in 2010, Still became project director at Cleveland’s University Hospitals for the landmark Systolic Blood Pressure Intervention Trial (SPRINT), supported by the NIH’s National Institute of Diabetes and Digestive and Kidney Diseases, National Institute of Aging, and National Heart, Lung, and Blood Institute. University Hospitals was one of five Clinical Center Networks across the country selected to conduct the decade-long trial, which recruited more than 9,300 participants, and Still helped coordinate all of the project directors across the nation.

“Carolyn is a star and has been since I first met her,” said SPRINT investigator Jackson T. Wright, MD, PhD, professor emeritus at Case Western Reserve University School of Medicine and director of the Clinical Hypertension Program at University Hospitals Cleveland Medical Center.

Through SPRINT, Wright became Still’s mentor—and now, the hypertension expert is a collaborator on Still’s latest study. “Carolyn has made the transition from trainee to mentee to mentor to leader in remarkable fashion and,” he noted, “in remarkable time.”

Wright called Still’s work “critically important” for Black patients, who “are more likely to develop the disease, die from the disease and suffer terrible consequences even in those who survive—and a lot of it is due to the lack of control.”

And so, through her latest study, Still could transform how hypertension patients, especially those in the Black community, are treated, Wright said.

Still has focused her work on the health of Black Americans since graduate school at Florida A&M University, when she first began researching health disparities related to diabetes and hypertension. When it came time for her to move into a doctoral program, Still’s dean led her to an opportunity nearly 1,000 miles away: Frances Payne Bolton School of Nursing’s then-dean, May Wykle, PhD, RN (NUR ’62, ’69; GRS ’81, nursing), and Professor Diana Morris, PhD, RN (NUR ’86; GRS ’91, nursing), were seeking research-focused PhD students through a Graduate Assistance in Areas of National Need grant award. Wykle, who dedicated much of her career to growing enrollment of Black nursing students and faculty after facing racism as an African American woman entering the field in the 1950s, specialized in topics such as minority elder health, while Morris focused on geriatric, adult, and minority mental health, among other areas.

“Carolyn has always been a hard worker,” Musil said of her experience with Still over more than a decade. “She has a calm, confident demeanor and projects competence.”

Still brings this approach to her research studies—and pairs it with a business acumen untapped in many nurse scientists.

While working on the SPRINT study, Still joined the university’s Weatherhead School of Management as a student in its inaugural health care management master’s degree program. She viewed it as an opportunity to “learn something new” and explore the business side of health care. But what the “lifelong learner” found: Though nursing and management are vastly different fields, they’re highly complementary.

“Having a research grant is a business within itself,” Still said. “You have to be kind of an entrepreneur to be successful as a [principal investigator]—having oversight of the enterprise, keeping up with large budgets, maintaining program documentation, balancing budgets, working with and managing staff.”

Still brings all of these skills and more to her latest study—a grant that Musil said could “define the career trajectory of the faculty member.” Perhaps more importantly, Musil said, an award of this significance “provides opportunities for students, faculty and others to grow research in this critical area of minority health.”

And for Still personally, this research study marks a chance to bring her career full circle—from a teenager providing care to her aging great-grandmother to a seasoned researcher empowering Black patients to care, and advocate, for their own health.

Carolyn Harmon Still sought a cross-campus, interdisciplinary team of researchers at Case Western Reserve whose varying backgrounds and expertise will bring insight into hypertension, working with minority communities, facilitating and tracking data, and qualitative research methodologies. They include:

“We have a well-versed expert panel of individuals who are helping to support this study,” Still said, “so we’re ready to take off and get rolling.”