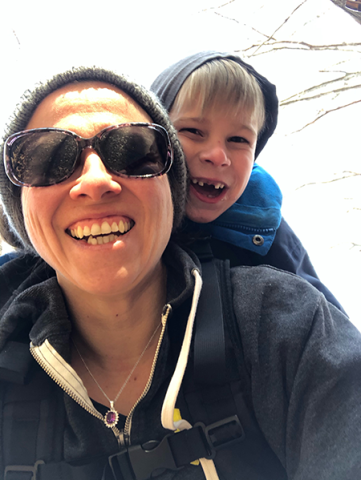 On Feb. 28, Frances Payne Bolton School of Nursing researcher Annie Papik’s community of family and friends will be wearing bright green to raise awareness for Rare Disease Day and to support her 9-year-old son, John, who is one of six people in the world with a rare gene mutation.

After eight years of symptoms, tests and few concrete answers, Papik and her family received the results from a whole genome sequencing in June 2021 that revealed John’s genetic mutation of the Methenyltetrahydrofoloate Synthetase (MTHFS) gene.

Papik said the mutation caused John’s hypomyelination, which is the lack of growth in myelin, the fatty material that surrounds neurons and helps them fire. The family discovered the hypomyelination when John was 3 years old after the second MRI of his brain showed the same results as his scan at 18 months old.

“At 3 years old you should have a complete white matter when you do an MRI of a brain, not gray matter. The myelin makes it look like a white matter because of how fatty and dense it is,” Papik said. “We didn’t know why it was that way, but essentially that’s the reason why he can’t talk or walk or do anything besides steal your heart.”

The MTHFS gene helps process vitamin B, B9 or folate specifically. Papik said the mutation stops the body from breaking down B9 into folinic acid and ultimately into L-methylfolate, which can be processed by the brain.

“My son’s neurologist explains it as a traffic jam,” she said. “There’s all this folinic acid build up and it’s stopping the flow of everything that needs to cross over the blood-brain barrier. We have to eliminate Vitamin B from his diet as much as possible.”

Knowing the cause of John’s condition didn’t answer all of Papik’s questions, but it means that she can focus on outreach for the rare disease community.

“I’ve really been battling, trying to get my son what he needs. Now we’re at the spot where we’re doing everything that we can. We’ve got a good plan going forward,” she said. “We can’t do much more for where we’re at, but I can focus my energy on trying to get the awareness out.”

John may be only one of six people with this MTHFS gene mutation, but Papik says he is part of the 300 million people worldwide who have a rare disease.

In 2008, the European Organization for Rare Diseases (EURODIS), a non-governmental patient-driven alliance of patient organizations, started Rare Disease Day, which is observed on Feb. 28, or Feb. 29 in leap years—the rarest day of the year.

“Because they’re so rare, there’s no way to actually do research on rare diseases because the need isn’t there,” Papik said. “When you have a handful of people with just one specific disease or disorder, there’s going to be no research, which means there’s no hope.”

Papik, who has been a researcher for 11 years, and has been at Case Western Reserve University for six years on various oncology and clinical studies, said conditions that affect the many—such as cancer, Autism or Down Syndrome—receive the most research commitment because so many people have those diseases.

“What Rare Disease Day does is bring awareness to the 300 million, and provides a place to donate,” she said. “Their website has amazing stories from people all over the world. It’s a global event.”

One way Papik and her family are raising awareness is asking everyone to wear bright green on Feb. 28. The color is a main feature of all the equipment and assistive technology used by the Papiks in John's care.

Papik said it’s important to observe Rare Disease Day because there may be other community members who may be part of that 300 million.

“He is probably the only person in his school with this disease, but I don’t know if there’s somebody else who might have a rare disease. It might not be as debilitating as his disease, but it could be just as rare,” she said. “It’s a fight to find somebody who understands what you’re going through.”

John is in third grade, and Papik said his class and school community is very supportive.

“They have this empathy for people who are different, and I think that’s because of John,” she added. “They see this kid who is different, but they can see he’s present, that he gets it. We’re out to dinner or a store, and people come up and say ‘Hey, John!’ and my husband looks at me like, ‘Do you know them?’ Nope, they know John.”

Now that her family is at the best possible place to help her son live his best life, Papik said she is determined to make sure Rare Disease Day is known.

“Unless you know somebody with a rare disease, you don’t know about this community. That’s why wearing bright green is such a big thing. You can’t ignore bright green,” she said. “These rare diseases are everywhere, and we just don’t know it.”

Above image: Researcher Annie Papik with her son, John, on a hike in November 2020. Photo provided.