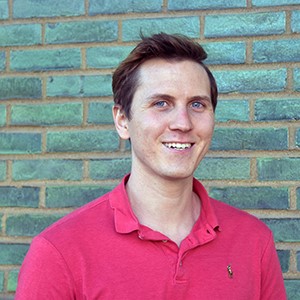 While working in research for Case Western Reserve University (CWRU) since 2019, Carlos Padilla made the shift to the Frances Payne Bolton School of Nursing from the CWRU School of Medicine this Spring.

A research assistant, Padilla works with Professor Jaclene Zauszniewski’s team on a dementia caregiver study funded by the National Institutes of Health. The study is focused on adult family members of persons experiencing progressive memory problems such as Alzheimer’s Disease.

While his career at the university has always been focused on research, Padilla said he chose to work at the school of nursing because he “directly interacts with the wonderful people partaking in caregiving, a generous and often overlooked population.”

The research is personal for Padilla, whose grandmother recently passed away from Alzheimer's Disease. The devastating and widespread effects of dementia at large motivates his work in the field.

Alzheimer’s affected as many as 5.8 million people in the United States in 2020, and that number is expected to triple by 2060.

"As a minority, a hispanic, and of Colombian descent all groups particularly affected by Alzheimer's. It's great to contribute to reducing health disparities seen in those suffering from Dementia and Alzheimer's and also their loved ones," he said.

Padilla was born in Caracas, Venezuela, and is Colombian on his mother’s side of the family and Venezuelan on his father’s. His connection to the area of research, combined with being raised on the east side of Cleveland, furthered his desire to work in research at Case Western Reserve.

Having spent time studying, working, and volunteering abroad before joining CWRU, Padilla has a fondness for international cuisine.

"Cleveland has some great hispanic options such as Pupuseria Katerina, La Casita Mexican Restaurant, Batuqui and other fantastic international restaurants such as Balaton, LJ Shanghai, Kafiya’s Kitchen, and Michaelangelo’s," he said.

Get to know Carlos

Do you have any favorite Hispanic food(s)? Empanadas

Who is your favorite musical performer/band? Carlos Vives

What is your favorite book? Harry Potter

How do you spend your free time? Volleyball and Yoga