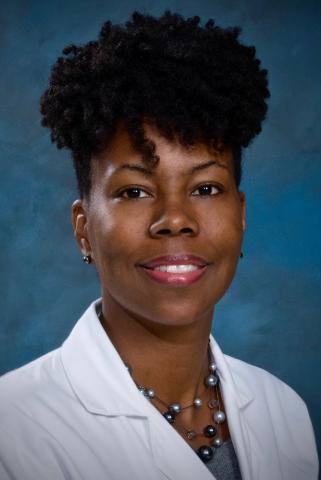 PhD student Jessica McCullough, MSN, APRN, FNP-BC, PMHNP-BC, has been selected as a 2020 Minority Fellow by the Substance Abuse and Mental Health Service Administration (SAMHSA). Jessica is a current Legacy Fellow at FPB.

In 2014, while providing care to an underserved and minority population at a local federally qualified health center as a Family Nurse Practitioner, McCullough routinely noticed a high demand for mental health care and shortage of mental health care providers. The disparity of need for care sparked her interest in focusing on psychiatric/mental health nursing.

“In late 2015, at the height of the opioid epidemic, the [health center] was awarded a grant for two years to institute an office-based treatment program,” she said. “I was offered and accepted the opportunity to create the program with an interdisciplinary team. People were—and still are—dying due to substance abuse and opioid overdoses. I felt compelled to help.”

Funded by SAMHSA, the Minority Fellowship Program’s mission is to “increase the number of rigorously educated nurses from under-represented ethnic minority groups” in psychiatric/mental health to conduct research, assume leadership roles, expand literature, and to be members of teams which help to improve ethnic/minority populations.

A Cleveland native, McCullough said CWRU’s reputation of excellence and vast network of experience nurse scientists was a major factor in her decision to pursue her PhD at the school of nursing. But location was also a consideration.

“I also wanted to stay close to home, since I am a Clevelander, and work with community organizations in mental health and substance abuse disparities,” she said. “Cleveland has a close network of substance abuse providers and mental health treatment agencies. I knew that CWRU would prepare me to be a leading nurse scientist.”

“We do have St. Vincent Charity Hospital Psychiatric Emergency Department, one of only two in Ohio and a number of community mental health clinics providing treatment and counseling services,” she said. “Nonetheless, racial and ethnical disparities still exist, in my opinion, because of a multitude of barriers including access caused by a shortage of mental health providers, poor quality of care, lack of minority representation in the workforce, insurance parity or lack thereof, high out-of-pocket costs, lack of trust and stigma to name a few.”

During the COVID-19 pandemic, McCullough said everyone one has been affected and she has seen an increase in her practice as a psychiatric mental health nurse practitioner.

“I have observed an increase in several mental health conditions such as anxiety and depression, more overdoses, and a substantial number of new clients,” she said. “Many people are reporting feeling lonely, isolated, hopeless, helpless, and numerous other feelings due to the COVID-19 pandemic. People are having a difficult time dealing with the shutdown, isolation, and quarantine. Technology has helped to bridge the access to treatment gap, however, there are still many barriers, one of which is the technologically challenged individuals and disparities with smart devices and Internet access.”