The Story of CWRU

Western Reserve College was founded in Hudson, Ohio, in 1826. Case School of Applied Science was founded in 1880 in downtown Cleveland. During the 1880s, each left their founding location and moved to adjoining campuses east of the city, in an area now known as University Circle. In the following decades, they laughed, they cried, they learned, they discovered, they trounced each other in football, they grew, they cooperated, they changed their names and they flirted with the idea of merging. At long last, they agreed in 1967 to "federate," forming an institution with a very long name—Case Western Reserve University—that immediately assumed a position among the nation's leading research universities. Because the athletic schedules were planned well in advance, they still competed against each other in sports for three more years. Since then, the university has continued to grow and strengthen its programs, preserving and celebrating its remarkable history and traditions.

If you don't read any more of this section, you at least have the basics.

To understand how this institution began, it's necessary to know a little about the Western Reserve of Connecticut—just a little, though, so don't get impatient.

In the seventeenth century, the King of England awarded the Connecticut Colony the land starting at the western edge of what is now the State of Pennsylvania and running westward for hundreds of miles. They weren't sure how far it went, since those western lands were uncharted at the time. In the 18th century, the U.S. Congress modified that grant to create a "Western Reserve" for the State of Connecticut in consideration of the losses the state suffered during the Revolutionary War. This area corresponds approximately to today's Northeast Ohio. 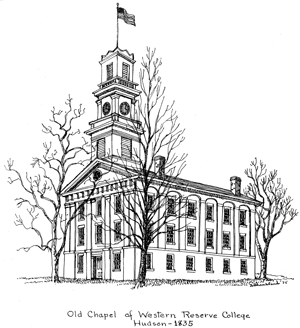 In the years that followed, settlers and land developers from Connecticut traveled to their

"Western Reserve," working hard to create communities that inevitably resembled those they had left. They brought strong commitments to religion and education, and, before long, church leaders throughout the region were engaged in efforts to start a college. After extended negotiations with several communities in the Western Reserve, they accepted an offer of land and other support from David Hudson, a farmer who was the leading citizen of the town that bears his name. And, in 1826, the Ohio Legislature granted a charter to the Board of Trustees of Western Reserve College to operate an institution in Hudson that would "afford instruction in the liberal arts and sciences."

In the following decades, some 26 miles to the northwest of Hudson, the city of Cleveland grew rapidly into the region's principal population and business center and its leaders began planning to create institutions of higher learning there. One of these was Leonard Case Jr., a graduate of Yale and son of a wealthy land developer. He was also a lawyer and poet, though by all accounts, he devoted as much time to the study of the natural history of the region. In the 1870s, he created a trust, not to be made public until his death, that included valuable real estate to be used to create a "school of applied science," an institution that would offer instruction in the use of science to improve the conditions of life. He died in 1880 and in less than a year, Case School of Applied Science was established, operating initially out of the Case homestead near Cleveland's Public Square.

The first six decades of Western Reserve College's existence were by no means dull. Shortly after its founding, the college and the town of Hudson were deeply split by a debate between two groups opposed to slavery: the Abolitionists and the American Colonization Movement. The former group sought the immediate, unconditional end of slavery and the latter group advocated the voluntary emigration of freed slaves to Africa. Hudson was active in the Underground Railroad effort and the college had enrolled its first African American student in 1832, just six years after opening.

Years later, before and after the move to Cleveland, the institution was again divided, this time on the issue of educating women and men together. In the 1850s, six women had graduated from the college's Medical Department, founded in 1843 in Cleveland. In Hudson, President Cutler had declared the college open to women students in his inaugural address in 1872. But in the 1880s, at the time of the move, the topic of coeducation was revisited. After intense debate and the anguished departure of a president, Western Reserve ended undergraduate co-education, and instead established coordinate colleges - Adelbert College for the men, and the College for Women (later Flora Stone Mather College) for women students.

Growth in Scope and Scale

The late 1800s and early 1900s were a period of rapid change in American higher education as a number of institutions added capacities in research and advanced education. In Cleveland, this was illustrated by the 1887 collaboration between Case physicist Albert Michelson and Western Reserve chemist Edward Morley, whose discoveries about the nature of light eventually contributed to Einstein's general theory of relativity and thus the basis of much of modern science. Both institutions were increasing the scope of their programs, perhaps most dramatically at Western Reserve, which, between the 1890s and the 1920s, added the still-existing schools of law, dentistry, graduate studies, applied social sciences and nursing.

During the 1920s, the two institutions—with strong community interest and support—gave careful consideration to merging, but declined to do so. They did increase their cooperative efforts, initially through a joint venture known as Cleveland College—the region's first institution primarily for adult and part-time students—and later through cross-registration, joint departments, shared athletic facilities and a common calendar.

Reflecting national trends, both institutions entered the 1950s with rapidly growing enrollments and increasing emphasis on research and advanced education. By the mid-1960s, leaders of the two institutions once again considered the prospect of a joining together and this time they reached agreement. In an action without precedent in American higher education, Case Institute of Technology and Western Reserve University joined together—"federated"—in 1967 to form Case Western Reserve University. At the same time, the new university established an additional professional program, the School of Management.

The federation, so called to indicate the goal of bringing together two equal partners rather than one taking over the other, was not without its difficulties. There were political and community issues, ranging from the raging debate over the Vietnam War to racial strife in Cleveland and many other cities; financial issues, including a rapid downturn in federal spending for higher education and a sharp decline in the number of college-age students; and institutional issues, focused on the traditional rivalries between Case and Western Reserve. In his 1971 inaugural address, President Louis Toepfer quoted Charles Dickens: "It was the best of times, it was the worst of times…"

In 1992, a quarter-century after the federation, the restructuring of core program areas into the College of Arts and Sciences and the Case School of Engineering signaled a milestone in the transition from the two predecessor institutions. The university today thrives on collaboration across academic and administrative divisions and partnerships with literally dozens of other institutions, including its neighbors in University Circle. An extensive campus improvement program, begun in the late 1980s and continuing even now, has created a campus environment in University Circle that ranks among the nation's best.

As the university moves steadily toward its 200th anniversary in 2026, the institution is increasingly aware of its fascinating history, as well as its exciting future prospects.