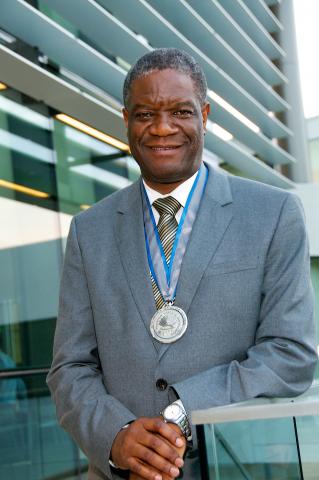 When Denis Mukwege was growing up in what is now the Democratic Republic of Congo (DRC), he would accompany his father, a Pentecostal minister, on visits to comfort sick people in his community.

The desire to heal those for whom his father prayed inspired a life’s devotion to do the same through medicine.

Mukwege, 59, a deeply committed physician and human rights activist, has worked tirelessly with and for women who have suffered excruciatingly traumatic and violent attacks in the name of war.

The Panzi Hospital, which he founded in Bukavu, Congo (the war-torn region of the DRC), and where he serves as manager and chief surgeon, is known worldwide for its treatment of women with severe gynecological problems, mostly from sexual violence. Panzi has become a beacon of hope for thousands of women. Patients who can’t afford care are treated for free.

He has persisted in his mission, despite attacks on his life. As a result, he and his colleagues have treated more than 40,000 rape survivors.

Mukwege, who has long been an outspoken international advocate for gender equality and women’s rights, has been recognized by many organizations and institutions for both his medical knowledge and commitment to ending sexual violence in the DRC, including twice being nominated for the Nobel Peace Prize (in 2009 and 2013).

In collaboration with The International Journal for Ethical Leadership (IJEL), Dr. Mukwege also published an article titled The Restoration of Moral Values in D.R. Congo.