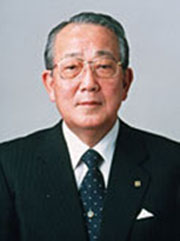 Kazuo Inamori was born in 1932 in Kagoshima, Japan. He graduated from Kagoshima University in 1955 with a Bachelor of Science degree in applied chemistry.

He established Kyocera Corporation in 1959, which has grown into an international firm supplying a wide range of communications and electronic products and services such as cellular phones and cameras.

In 1984, in response to the deregulation of the telecommunications industry, he founded DDI Corporation. Now known as KDDI, it is the second-largest common carrier in Japan.

Over the years, Inamori codified his beliefs about management and business into what is known as the Kyocera philosophy. It is based on the idea of "pursuing what is right for humankind." It was on the basis of this and two other principles—"people have no higher calling than to serve the greater good of humankind and society" and "the future of humanity can be assured only through the balance of scientific progress and spiritual maturity"—that he established the Inamori Foundation in 1984. He subsequently established the Kyoto Prize, an international award that honors individuals who have made outstanding contributions to the progress of science, technology, the advancement of civilization, and enrichment and elevation of the human spirit.

His principled approach to life, work and business has garnered him numerous honorary doctorates from several universities in the United States the United Kingdom and Japan. He is a member of several overseas civic and professional organizations including the Royal Swedish Academy of Engineering Sciences and the board of trustees of the Carnegie Institution of Washington. His representative books include A Passion for Success and For People and For Profit.