Nursing has long occupied a unique position in health care around the globe, combining expertise in clinical research with commitment to patient well-being. Now, with unprecedented technology and data collection tools, the health care industry is turning to nurse scientists to lead with a new approach that treats the individual as much as the illness—precision health. 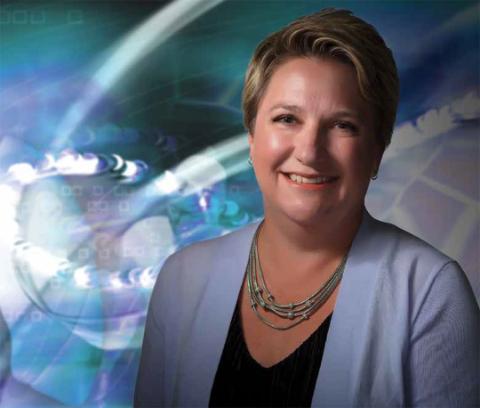 The advent of precision health promises a future where a onesize-fits-all approach to illness is replaced with treatments and disease management programs tailored to an individual’s environment, resources, symptoms, and even genetic makeup. Everything from DNA code to typical diet can play a part, and nurse scientists, with an established hand in assessing both science and symptoms, are poised to be among the early innovators in this developing field.

Faculty, such as Hickman, at Case Western Reserve University’s Frances Payne Bolton School of Nursing are reaping the benefits of this new national interest. Their specializations range from genetic diseases like cystic fibrosis to contracted viruses such as HIV— and their innovations in patient care not only take place within the human genome, but also on mobile phones.

WHAT THE GENOME KNOWS
Rebecca Darrah, PhD, assistant professor, started her career conducting pediatric and prenatal counseling for patients and families with diseases like cystic fibrosis. Now, with support from the Cystic Fibrosis Foundation and the National Institutes of Health (NIH), she researches the disease at the molecular level. Her goal is to better understand what genetic factors determine how cystic fibrosis symptoms presents in different people, with the hope of tailoring treatments to an individual’s risk factors.

Using mouse models, Darrah and her team are comparing two different genetic regions to see how the presence or absence of specific receptors affect a patient’s lung function. Initial results have shown that mice missing the AGTR2 gene have highly-improved pulmonary function, even when they have the genetic mutation that causes cystic fibrosis. In lab trials, Darrah injected cystic fibrosis mice with drugs that blocked the AGTR2 gene, to see if it improved their pulmonary function.

“When we took out that gene, they started to look a whole lot like mice without cystic fibrosis,” Darrah says. That’s the challenge of genetic diseases, Darrah explains. 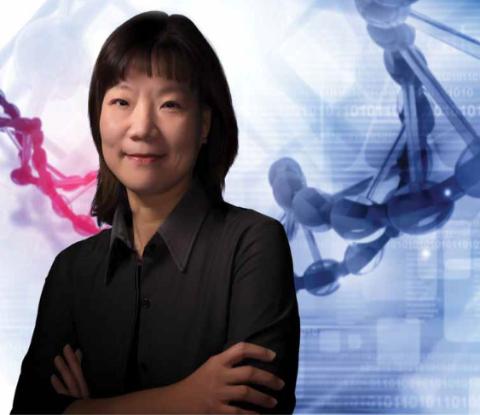 While all the mice had the cystic fibrosis disease, differences in the genetic make-up resulted in varying symptoms. The same is true for people. The type and severity of the symptoms can vary by specific genetic make-up. It makes a one-size-fits-all treatment plan ineffective. Precision health, she says, recognizes those inefficiencies, and strives to reduce or eliminate them.

“Years can be wasted if you try a treatment and don’t see a benefit,” Darrah says. “But if we can study the genetic structures using an individual’s own cells in a lab, we can predict the treatment challenges moving forward. If you have the kind of cystic fibrosis that has more aggressive lung disease, then your care team can treat that more aggressively from the beginning.”

The new possibilities offered by genome analysis do present some challenges. From a nursing education perspective, Darrah says, there isn’t an easy pathway to learning diseases and treatments. The field of genetic counseling is rapidly adapting to the proliferation of for-profit testing centers, which provide consumers with personalized genetic data, but often lacks the infrastructure to offer
skilled interpretation of the results.

“It’s a fantastic learning opportunity,” says Darrah. “And the level of care is potentially astronomically better.”

Assistant Professor Chao-Pin Hsiao, PhD, RN also works at the molecular level, but to relieve radiation-induced fatigue in cancer patients. Hsiao started her career as an oncology nurse, and credits her clinical work with motivating her to take on research that gets to the root of an  individual’s symptoms. “To improve a patient’s quality of life by eliminating symptoms is one of the core foundations of nursing,” she says. “As a translational scientist, I’m designing care for patients from their baseline.”

The baseline in Hsiao’s NIH research is the mitochondrial cell components that produce energy. After completing a doctoral dissertation comparing cortisol levels and reported stress in prostate cancer patients opting for radiation or surgery, she found that patients receiving radiation consistently reported higher stress with higher cortisol levels. With this result in mind, she joined a research group at NIH seeking to establish a phenotype—a description of characteristics related to molecular changes—for cancer fatigue. Now at Case Western Reserve University, her research delves into mitochondrial bioenergetic mechanisms of cancerrelated fatigue.

If she can demonstrate that radiation creates a mitochondrial shift that leads to reduced energy, it could provide new opportunities for patient interventions that boost mitochondrial function, and reduce cancer-related fatigue. 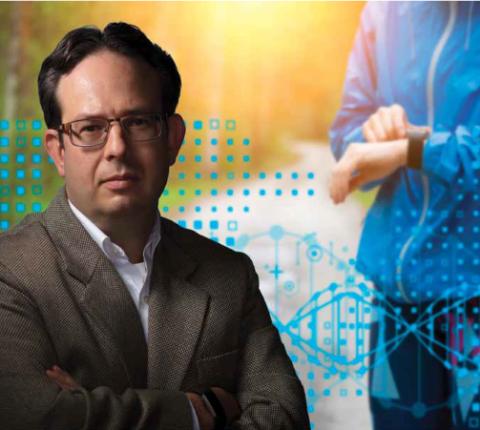 “Cancer fatigue is a subjective experience, with multi-factors impacting a person’s quality of life,” Hsiao explains. “But if I can propose early biomarkers for radiation-induced fatigue, we can identify, prior to the development of the subjective symptoms, and treat it before it becomes debilitating.”

Such approaches could mean a broad shift in the protocols for symptom science of cancer care that recognizes and anticipates radiationinduced cellular shifts and energy depletion. “Once we prove this,” Hsiao says, “we will improve a patient’s quality of life.”

CAUSES AND EFFECTS
As providers know, understanding risk factors at the genomic level is only part of improving health care outcomes. Lifestyle choices and psychosocial interventions play a big role in the lives of patients living with chronic conditions. Just as twentieth-century developments in genome sequencing have led to new discoveries, twenty-first century technology has opened up the realm of precision health at the lifestyle level, allowing researchers to create and refine therapies and practices geared toward a range of patients who share a diagnosis.

Assistant Professor Matthew Plow, PhD, also centers his research on fatigue, specifically in people living with multiple sclerosis. A former athletic trainer, Plow observed a lack of evidence-based exercise programs for people with disabilities. Such standardized recommendations, he says, often led to patients becoming frustrated and quickly abandoning regimens designed to build their strength and stamina. “I started thinking a lot about the behavioral piece of it, and how, when you give people all the recommendations, a lot of resources and energy are wasted,” he says. “What we want to do is identify the fatigue phenotypes, the patterns over time, and then identify the actual steps to manage this person’s symptoms of fatigue, and prescribe exercise programs tailored to the individual.”

Plow recently received a twoyear grant to advance his research from the Department of Defense to help the many people with multiple  sclerosis. Using mobile phones as an access point, the study will ask patients with multiple sclerosis to answer a series of questions five times a day to assess their activity levels, their stress levels, overall mood, and fatigue. It’s a departure from previous assessments, Plow says, which typically asked participants to report on a biweekly basis. “That would give us a composite score, but we couldn’t see fluctuations,” Plow says. “Some people with MS experience fatigue all the time, while others report daily highs and lows. Plus, some people experience it physically, while others cognitively.”

The new approach is intended to provide a more complete picture of the day-to-day changes that affect a patient’s symptoms, allowing clinicians to use the data to develop more customized exercise and wellness plans. Using information gathered from the study participants, Plow hopes to establish fatigue phenotypes, aligning with biomarkers  and symptoms in order to tailor recommendations accordingly. 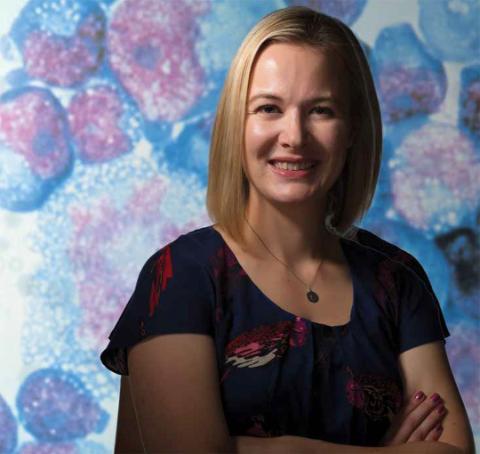 A similar behavior-modification approach is part of the work by Assistant Professor Allison Webel, PhD, RN in symptom management for people living with the human immunodeficiency virus (HIV). For years, health care has largely been focused on establishing a regimen of antiretroviral medications to combat HIV. The result, Webel says, is that an HIV diagnosis, once considered  terminal, is now a chronic condition that can be managed. “One day people were dying, and the next day they were living with a chronic disease,” Webel says. “We want them to live long and age well.”

That means a comprehensive, multifaceted approach to health care that considers HIV’s most common comorbidities, which includes cardiovascular disease and depression. Taking a precision health approach, Webel says, offers an opportunity to fully investigate what factors contribute to these additional conditions, and tailor interventions accordingly — “not just to a group of people with HIV,” Webel says, “but subgroups and individuals, to help people live better.”

To craft individualized treatments, Webel and her team are examining established biomarkers, such as fat distribution in the heart and liver, and maximal oxygen consumption (e.g. VO2 max) during exercise, to evaluate risk for cardiovascular mortality. They also consider social factors, such as employment, social surroundings, and family relationships, to see if they can characterize different groups and behaviors.

“We want to shift the conversation from medication regimens to health, which is something patients say they want, whether they’re in Cleveland or Uganda,” Webel says. “Once people have learned how to take their medications, and how to live with an HIV-positive diagnosis, we’d like to have conversations about healthy behaviors and living environments. Then we can create a health plan that works for the individual. This is shifting how HIV care is delivered today.”

INFORMATION FOR BETTER OUTCOMES
The success of precision health care demands an appreciation of something nurses already know: Health care isn’t simply about the patients, but also their family members and caregivers. That’s where Hickman’s work, supported by NIH and the Robert Wood Johnson Foundation, comes in: Targeted, specific approaches to decision-making that use both physiological and psychosocial elements to help caregivers navigate the health care system. 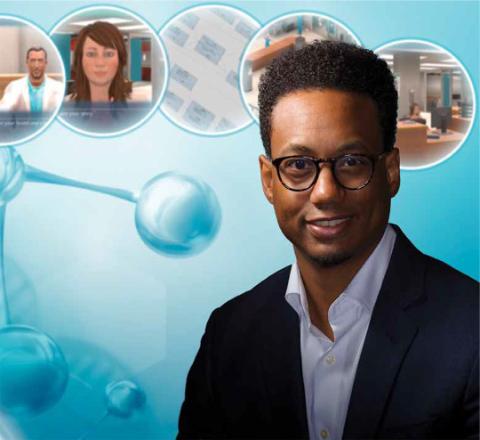 “My personal experience as a clinician made me realize that, in many situations, caregivers or families are not included in the process until providers need something from them,” he says. “Those situations are often time-sensitive, and you don’t get much time to deliberate. I wanted to help them make health-care decisions that align with the patient.”

Hickman’s primary intervention is through the creation of an interactive avatar that walks caregivers through several decision-making scenarios, offering unbiased, evidence-based information on procedures or treatment plans under consideration. The system, designed to work across a range of platforms, asks caregivers to identify their primary concerns, and provides a real-time response with information and suggestions.

“It’s ‘here’s the information, and here’s what the path will look like if you choose path A, versus path B,’” Hickman says. “The goal is to be proactive, and provide something that makes the patient or the caregiver feel prepared.”

In another study, Hickman and colleagues are adding a precision health perspective to their behavioral research. They are examining variations in a neurotrophic factor gene in the brain—proteins that support brain function—and how variations in the gene influence informed decisions about health care. “We can’t modify the genetic sequence,” Hickman says, “but if we know someone’s more susceptible to  a disease or will have difficulty with managing their mood or sustaining a health behavior due to their genetics, we can now deliver resources with greater precision to support their decision-making and health behaviors.”

This interplay between behavioral, biological, and psychosocial mechanisms represents the new frontier for precision health, made possible by recent developments in both research and intervention that combine more advanced technology and analysis.

“The concept of precision health isn’t really new to nursing,” Hickman says. “It’s a framework of nursing care, to do an assessment from both a psychosocial and biological standpoint. But what is new is the use of more sophisticated techniques. A precise nursing intervention can help alleviate burdensome symptoms, support wellness behaviors, and maybe even help guide decision-making.” +