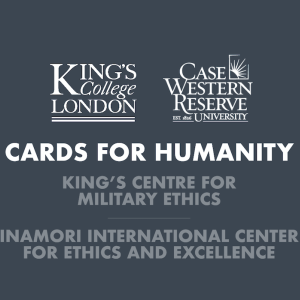 Cards For Humanity: New App Helps Military Service Members Consider Issues of Ethics In and Out of War

Military Ethics: Cards for Humanity covers broad areas of military ethics carefully curated and developed by leading researchers, ethicists, and legal specialists with expertise in the Law of Armed Conflict and International Humanitarian Law. Originally developed as a physical deck of playing cards, the app prompts discussion and debate to encourage and normalize the open consideration of ethical challenges that arise in the military environment and in and out of combat: If a soldier is faced with an order they think is unjust, what should they do? Is there a difference between unjust and unlawful? Is it weakness to tell someone if you have been psychologically affected by combat?

Each card and question a user draws is supplemented with additional prompts for background information, further questions for thought and discussion, and deeper explanations of the ethical issues through videos and reading materials. Groups of questions are thematically linked so impromptu or pre-planned discussions can quickly be developed using the app and supplemental open-access materials.

Military Ethics: Cards for Humanity, and the professional military ethics educational material it is based on, was beta tested by military personnel in Australia, Canada, Colombia, Egypt, France, Germany, Jordan, Sweden, Turkey, the United Kingdom, and the United States of America, amongst others from 2019 through 2021. More material is added on an ongoing basis to keep the conversation current and inclusive. The app will continue to grow and be refined with feedback from military and academic users.

A British military trainer called the cards “by far the best resources for generating conversations about ethics” he had come across in his 28 years in the Army.

Talking about ethics training and education, Brigadier Toby Rowland said, “time spent considering these issues as part of ongoing professional development and in particular prior to operational deployment definitely plays dividends later on.”

The Military Ethics: Cards for Humanity  app can be downloaded for free on Apple and Android operating systems and currently covers topics in English, Arabic, French, German, Spanish, Serbian, and Turkish, with more language options proposed for the future.