Framing a Better Civic Dialogue in an Age of Racial Reckoning: Universities, the Public, and Y 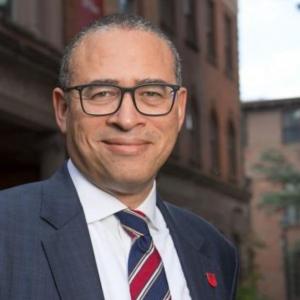 On Wednesday, April 7 from noon to 1 p.m., the Office of the Provost will host the fourth installment in the North Star Seminar series. The event will feature Dr. Jonathan Holloway, a U.S. historian, and 21st president of Rutgers, The State University of New Jersey.

Dr. Holloway's talk is titled "Framing a Better Civic Dialogue in an Age of Racial Reckoning: Universities, the Public, and You." The talk will address issues like healing divides and elevating the state of civic dialogue in America. Dr. Holloway will speak from his new book, The Cause of Freedom: A Concise History of African Americans, which asks, "What does it mean to be an American?"

This session will be moderated by Provost and Executive Vice President Ben Vinson III and Professor of Law Andrew S. Pollis, JD.