MedStar Washington Hospital Center is a 912-bed major teaching and research hospital. It is the largest private, not-for-profit hospital in the nation’s capital, among the 100 largest hospitals in the nation, and a major referral center for treating the most complex cases. Its cardiology program is highly acclaimed and its cardiac surgery program has consistently earned the highest national rating–three stars–from the Society of Thoracic Surgeons. It is also a respected top facility in the following areas: 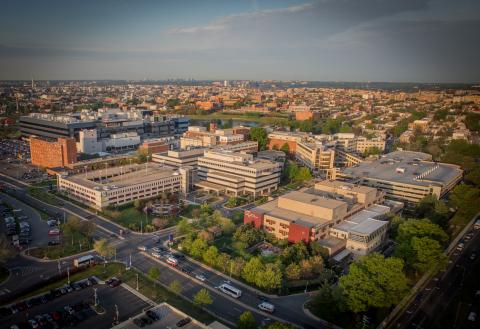 It operates MedSTAR, a nationally-verified level I trauma center with a state-of-the-art fleet of helicopters and ambulances, and also operates the region’s only adult Burn Center; the Comprehensive Stroke Center, which was first in the region; and the District’s only Cardiac Ventricular Assist Device program, the latter two which are certified by The Joint Commission.

Though the hospital has roots in post-Civil War Washington, D.C., MedStar Washington Hospital Center wasn’t formally founded until 1946, when The Hospital Center Act was signed into law by President Harry Truman. The law resulted in three hospitals within the District merging to create a new medical facility.

Today, the center is considered the high performing hospital in pulmonary disease and cancer treatments by U.S. News & World Report. It was the site of one of the District’s first heart transplants, and is home to the only 256-slice cardiac CT scanner in the nation’s capital. It also boasts the only 24/7 onsite cardiac catheterization team in the region.

MedStar Washington Hospital Center boasts a firm commitment to both the education of the next generation of medical professionals and the continued education of its healthcare providers.

The Master of Science in Anesthesia Program has maintained a close relationship with MWHC since the launch of the Washington location in 2012. As a primary affiliate, the center offers the majority of clinical rotations for first-year students. Additionally, it provides specialty rotations in cardiac, obstetrics, trauma, neurology, surgical intensive care, regional anesthesia, and outpatient care for second-year students. As a general hospital with strengths across specialties, MWHC is a key learning environment for our Washington students.

In addition to its partnership with the Master of Science in Anesthesia Program, the center maintains affiliations with several area medical schools including Georgetown University School of Medicine.