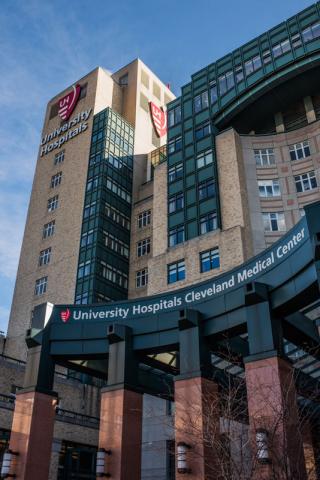 University Hospitals Health System is one of the nation’s leading healthcare systems, and has been ranked second among all hospitals in Ohio by U.S. News & World Report. It is also nationally ranked in ten specialties and eight children’s specialties.

In addition to these branches of the hospital, UH is home to some of the most prestigious clinical and research programs in the nation, including cancer, pediatrics, women's health, orthopedics, radiology, neuroscience, cardiology and cardiovascular surgery, digestive health, transplantation and urology. In biomedical research, UH ranks among the top 15 centers in the United States with approximately $75 million in annual extramural research funding and $10 million in clinical trials.

At the system’s core is the academic medical center, University Hospitals Cleveland Medical Center, where a number of our first-year students in Cleveland complete their clinical training. UH Cleveland Medical Center is perennially among the highest performers in national ranking surveys, including “America’s Best Hospitals” from U.S. News & World Report. UH is also home to Harrington Discovery Institute at University Hospitals – part of The Harrington Project for Discovery & Development. UH is one of the largest employers in Northeast Ohio with 28,000 physicians and employees.

The hospital is deeply devoted to education and training, and advancing the science of health and the art of compassion is UH’s vision for benefitting its patients into the future. This dedication is reflected in the organization’s unwavering mission: To Heal. To Teach. To Discover.

The relationship between University Hospitals and Case Western Reserve University was first established in 1896, when the two institutions joined together to form the largest biomedical research center in Ohio. Today, through faculty appointments at Case Western Reserve University School of Medicine and through research conducted with support from UH’s Harrington Discovery Institute, physician-scientists at UH Cleveland Medical Center advance medical care through education and innovative research that brings the latest treatment options to patients regionally and around the world.

The Master of Science in Anesthesia Program has maintained a close relationship with the University Hospitals Health System since its founding in 1969. As a primary affiliate, UH offers clinical rotations for both first-year and second-year students. The diversity of strengths at UH allows our students, particularly in their second year, to experience a variety of specialties.