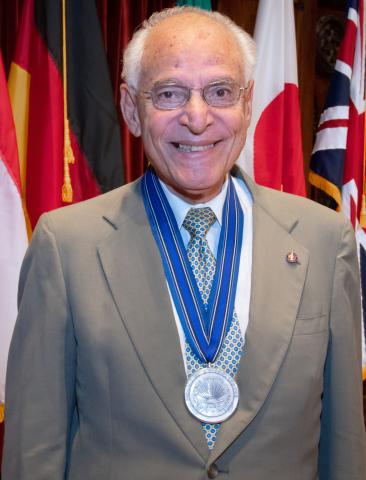 Hailing from a small Egyptian town in the Nile Delta, Farouk El-Baz credits his sense of curiosity and fascination with the physical world to his father’s dedication to teach his wife and their nine children to read and write. El-Baz has paired his powerful imagination with a deep knowledge of the sciences, helping transport humankind to its furthest reaches and provide new access to such life-giving forces as water and education.

In his late 20s, El-Baz helped choose landing sites for the first manned mission to the moon, Apollo 11. In the early 1970s, he helped establish and direct the Center for Earth and Planetary Studies at the National Air and Space Museum at the Smithsonian Institution - and later helped pioneer the use of IMAX movies.

Until his retirement this spring, El-Baz served as the director of Boston University’s the Center for Remote Sensing, a NASA-recognized “Center of Excellence” that studies earth’s environment, using technology created for space exploration - including in the search for groundwater sources in some of the world’s driest places.

A geologist and clear-water advocate, El-Baz has advised leaders all around the globe and especially on the African continent on how they can work together to decrease their people’s dependence on strained water sources while opening up new sources to relieve suffering populations (such as cooperating to raise water hidden underground in conflict-torn Darfur).

His scientific and historic achievements have not escaped the notice of popular culture, including a portrayal of El-Baz training NASA astronauts in the Tom Hanks-produced HBO series From the Earth to the Moon, and a spaceship that bore his name in Star Trek: The Next Generation.

A transcript of his prize speech can be found here.