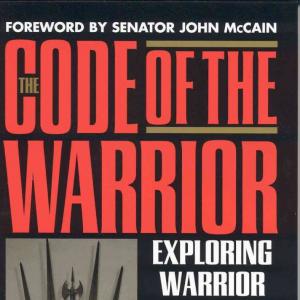 That’s a topic of military ethics that Shannon French has explored for decades, both in her role as the Inamori Professor of Ethics at Case Western Reserve University and, before that, when she was teaching ethics to midshipmen at the United States Naval Academy (USNA).

Last week, French was honored for her work in the field at a symposium celebrating the 25th anniversary of a course she created while teaching at USNA: “The Code of the Warrior.” The course has since been taken by hundreds of future officers, and French’s work is studied in all branches of the U.S. military.

“We talk a lot about the potential impact of our scholarship,” French said, “but for me, there is nothing I’m more proud of as a military ethicist than knowing that, somehow, reading or studying my work has genuinely helped real people survive combat experiences—not in the physical sense, but mentally and morally.”

‘The Code of the Warrior’

Though French transitioned to teach at CWRU in 2008, her military ethics course remains one of the most popular elective classes ever offered at USNA—and a book she authored by the same name is one of the most recognized and respected sources for the understanding of military culture in the world.

“I care profoundly about the burden we place on those who are asked to serve our country with a mandate to take lives—but only certain lives, in certain ways, at certain times,” French explained.

“We shouldn’t ask them to do that on our behalf without taking the time to try to understand what it really means to be a warrior—or a warfighter or a combatant, the word ‘warrior’ isn’t what matters—and what we owe them in return,” she continued.

The course and book both look at the ethical values of a diverse range of warrior cultures throughout history, including the ancient Greeks and Romans, Vikings, Celts, medieval knights, Native/Indigenous Americans, Chinese Warrior Monks, Japanese Samurai, the Zulu and Islamic Warriors.

In her research, French found there were consistent themes across time and different cultures that are still vital today, including the central idea that warriors must deeply embrace an identity that requires them to show restraint—to have lines they will never cross—even in the most dangerous and stressful circumstances.

Having that restraint, or that code, French explained, keeps warriors from feeling like—or turning into—murderers.

“Military ethics is a very complex field of ethics, with extremely high stakes,” she said. “There is a lot of moral tragedy involved and no-win situations. Working in this field is meaningful to me because the issues get to the heart of what matters most to humans and how we can preserve our humanity in the most trying circumstances.”

At Case Western Reserve, French dedicates much of her time to this field as the director of the Inamori International Center for Ethics and Excellence. The center is focused on exploring ethical issues from a global perspective, including military ethics.

In 2017, the center partnered with the university’s College of Arts and Sciences and School of Law to create the first—and only—master’s degree in military ethics in the U.S. The program, which is directed by French, allows students to immerse themselves in topics ranging from military and professional ethics to leadership and law.

“Each year, the program sees a great range of students,” French said, “from those in the military or hoping to go into the military, to those who are entirely civilian but want to understand military ethics issues so they can advise on policy, work with veterans, study international law, or teach military ethics themselves.”

This fall, it welcomed its biggest cohort of students, including U.S. and international military members, as well as traditional graduate students and integrated graduate studies students.

“We need to narrow the civil-military divide so that all citizens are part of the conversation about what is worth killing and dying for—and how we should or should not use force in the world,” French said.

Get your copy of the first and second edition of “The Code of the Warrior,” learn more about CWRU’s Master’s in Military Ethics program, and explore the work of the Inamori International Center for Ethics and Excellence.